Vatican accused of ‘selling out’ Catholic Church in China 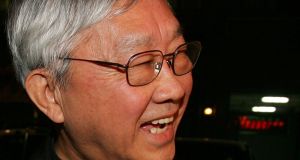 Retired Hong Kong cardinal Joseph Zen: ‘Am I the major obstacle in the process of reaching a deal between the Vatican and China? If that is a bad deal, I would be more than happy to be the obstacle.’ File photograph: Paul Yeung/Reuters

China’s most outspoken cleric, the retired Hong Kong cardinal Joseph Zen, has accused the Vatican of “selling out” the Catholic Church in China after the Holy See asked two “underground” bishops to give way to prelates approved by Beijing.

Pope Francis has made regularising relations with China a priority for the Vatican and closed-door negotiations have been going on for a year and a half, but the issue of who has the right to appoint bishops is the chief impediment.

“Am I the major obstacle in the process of reaching a deal between the Vatican and China? If that is a bad deal, I would be more than happy to be the obstacle,” Cardinal Zen wrote in a colourful and forthright statement shared with the media.

Part of the current crackdown on civil society by president Xi Jinping’s government is aimed at bringing religions to heel. About half of China’s 10-12 million Catholics worship in underground churches that refuse to recognise Beijing’s control over the faith through the Chinese Catholic Patriotic Association (CCPA).

While there is overlap between the official and underground churches, and official bishops have been sanctioned by the Vatican, many government appointees have been rejected by Chinese Catholics and some excommunicated.

Cardinal Zen said he believed efforts to find mutual areas of agreement with a “totalitarian regime” were doomed.

Without mentioning Cardinal Zen specifically, the Vatican issued a rebuke, saying remarks about the church in China were “surprising and regrettable” and fostered “confusion and controversy”.

Ties were cut after the Communist Party won the civil war in 1949 and the Vatican is one of the few countries that gives diplomatic recognition to self-ruled Taiwan, where the nationalists fled after the war.

In his letter, Cardinal Zen, who retired as archbishop of Hong Kong in 2009, outlined his visit to the Vatican in January to convince Pope Francis of the need to be wary.

He spoke of a “schism” in the church if the rule of the official church is enforced.

Acknowledging that he was viewed as a pessimist, Cardinal Zen said this was based on his experiences.

“From 1989-1996, I used to spend six months a year teaching in the various seminaries of the official Catholic community. I had direct experience of the slavery and humiliation to which our brother bishops are subjected,” he wrote.

The Shanghai-born Zen has had bitter experience of the excesses of Chinese history. Born in 1932, his mother Margaret had to sell her jewellery to buy bread and put him through school and many of his generation have been imprisoned and tortured in China for their beliefs.

The Catholic Church has a long history of conflict with the authorities – the Jesuits were stopped from spreading Catholicism in China in the 17th century by a row with the Ming emperors over how to fuse religion and local traditions. Some say the fact that the pope is a Jesuit may be a contributing factor to the current stalemate.