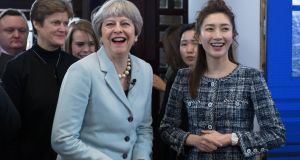 Chinese premier Li Keqiang, who is responsible for economic affairs in the world’s second largest economy, has reassured British prime minister Theresa May that Brexit will not affect ties between London and Beijing.

It was the kind of positive message Ms May was hoping to hear on her three-day mission to China, in which she will try to forge a post-Brexit free-trade deal while rebooting a much-vaunted “golden age” of ties.

Ms May was welcomed with full military honours before the two national anthems were played. “I’m pleased that we’ve agreed to intensify the ‘golden era’ of UK-China relationship. The UK and China are both global powers with a global outlook,” the prime minister said.

As the UK left the EU it would become “ever-more outward looking,” she said.

Trade volume between Britain and China was $79 billion (€64 billion) in 2017 and Britain hopes to sign a free trade pact with China after it leaves the EU in March 2019.

Turning to domestic issues, Ms May rejected criticism of her leadership and speculation about her future as prime minister, as well as her handling of Brexit, which British Eurosceptics complain is too weak and which the pro-Europe lobby see as economically risky.

“As I have said to you before, I am not a quitter and there’s a long-term job to be done ... we need to ensure that we do speak about the achievements that we have seen,” she said.

Her goal was to help build what she called the “British Dream” – a clear reference to Chinese president Xi Jinping’s policy of building the “China Dream” of national rejuvenation.

“There are many people in the United Kingdom who want to ensure that they and their families can achieve the British Dream, of ensuring that each generation has a better than the future than the last,” she said.

Ms May had been expected to raise the sensitive topics of China’s human rights record and Hong Kong democracy, but there was no mention of these topics in her address, with the focus on more general geopolitical topics.

“We are working together to tackle global and regional security challenges such as North Korea, modern slavery, threats to aviation security, to build sustainable economies of the future and to enhance bilateral trade and investment relationships and develop our strong education and societal links,” she said.

The prime minister is also due to hold talks with Mr Xi.

Earlier, in Wuhan, home to more students than any other city in the world, Ms May unveiled a £550 million (€627 million) education deal, which includes a teacher-exchange programme and an English-language teaching promotion. There are 155,000 Chinese students in Britain.

Ms May is travelling with her husband Philip and a delegation of 50 business leaders, including CEOs from HSBC, Jaguar Land Rover and Standard Chartered Bank.

Earlier, the Xinhua news agency warned that Ms May’s decision to delay a nuclear power plant expansion at Hinkley Point because of security concerns over Chinese investment, was “detrimental” and an example of “China-phobia”.