How do you fashion unanimity out of profoundly different interests? 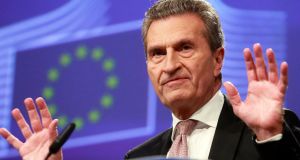 They fired the gun for the off on Monday in Brussels on a process that is at least as complex and divisive as Brexit, and one that will preoccupy and torment those diplomats and officials who are not Brexiteering for at least as long.

A process akin to herding cats, ultimately to fashion unanimity out of profoundly different interests.

It’s the negotiations for the next “Multiannual Financial Framework”, or MFF, as the EU’s seven-year budget is known here. How to raise and spend the €1 trillion-plus that the union will go through between 2021 and 2027. And all without the gaping €12 billion-€13 billion a year hole that the UK’s departure will leave.

The commission this week sponsored a high-level conference of ministers, commissioners, officials of various kinds and of various institutions, academics and think-tankers, and of course MEPs – the budget authority – to set the ball rolling.

Commision president Jean-Claude Juncker opened the discussion with a warm tribute to Peter Sutherland and, manifesting not a small amount of the latter’s can-do optimism and ambition, he suggested that their task could be straightforward if only they scrapped their usual modus operandi .

They must not start, as they had always done in the past, by considering the net cost to each member state of the EU budget and how it could be reduced, but instead on what they agree needs to be done.

The list of new tasks for the next budget, many of them funded to date by levies or by creatively stretching and reallocating current budgets to the point of breaking them, is lengthy and costly: collectively managing the migration challenge to our southern borders, facing up to climate change, internal and external security in the age of terrorism, defence, employment and training for the young, investment in SMEs, the digital challenge and so on.

And then there is the idea of a budget for the euro zone, as much a macroeconomic stabiliser as a spending programme.

Not to mention the old reliables such as Cap, cohesion funding, Erasmus and the Horizon science and innovation programme. None of them expendable or even, it would seem, politically touchable. A circle that will not square.

You have to laugh

Mario Monti, a former Italian commissioner tasked with coming up with new means of generating revenue streams – “own resources”, in the EU parlance – chuckled as he recalled the frustrations of the last prolonged budget round in 2013.

They never discussed what they wanted to spend it on, he insisted, “only net balances mattered”. They were the only politically acceptable measure of national success. There were only net contributors and net beneficiaries in the room.

But if member states could break with what the French MEP Jean Arthuis called “the tyranny of juste retour”, the prospects for the budget round were good, Monti said, with a twinkle in the eye that suggested he thought it impossible.

Others also echoed the Juncker spirit of altruism. German foreign minister Sigmar Gabriel, representative of the great net contributor to the budget, insisted that you could not look at the issue simply in cash terms. “We are all net beneficiaries,” he insisted, and endorsed budget commissioner Günther Oettinger’s view that the overall cap on EU spending of 1 per cent of EU gross national income (GNI) – one cup of coffee per citizen per day – needs to be lifted.

Oettinger suggested it should be raised to 1.1-1.2 per cent of GNI – by 10-20 per cent – but whether Gabriel will be able to bring his yet-to-be-formed government with him on that level of ambition is doubtful. Swedish and Austrian speakers – net contributors – insisted there was no way they would agree to an increase at all.

How, then, will the yawning gap between revenue and expenditure be bridged? Monti has suggested some new “own resources” EU taxes in areas such as the environment. But with the union unable to borrow for current spending, the obvious answer is cutbacks, and the two biggest elements in the EU budget – agriculture (Cap), costing some €58 billion a year; and cohesion/structural funding – will be the main targets.

Ireland, these days also a net contributor to the budget, still relies heavily on Cap payments, and officials will be nervously reading press reports, disputed in Paris, that French president Emmanuel Macron is willing to back cuts in farm spending. Having been a major beneficiary of cohesion support over the years, will Dublin now be willing to say to the new Europeans that they must forgo such assistance? At least in part.

The Irish view is yet to be formulated – will we, for example, support a rise in the 1 per cent cap? – but we may get an indication from Taoiseach Leo Varadkar when he addresses the European Parliament next Wednesday.

A strategic imperative to reach out to build new post-Brexit alliances might suggest a generous expansionary budget approach. Or is the fiscal conservatism of some of our newer Nordic friends, very much Varadkar ideological soulmates, likely to infuse our approach?

In May, Oettinger will present concrete proposals, which he hopes – and it would be a first – to have signed off by the council and the parliament by June 2019. This is going to be a long haul.