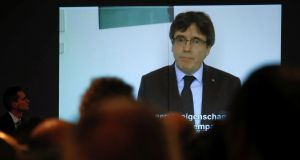 Former Catalan president Carles Puigdemont: messages appear to say he is withdrawing from politics to concentrate on his legal affairs. Photograph: Yves Herman/Reuters

A series of text messages sent by Carles Puigdemont to a colleague and made public by the Spanish media suggest he is resigned to giving up his attempt to be reinstated as Catalan president and that he believes the Spanish government has defeated the independence movement.

“We are once again living the last days of the Catalan republic,” Mr Puigdemont wrote in one of the messages, which were sent to Toni Comín, a pro-independence politician who, like Mr Puigdemont, has taken refuge in Belgium in order to avoid charges of rebellion and sedition in Spain.

“I suppose you realise that this has finished,” he wrote, adding that the Spanish government “wins”.

The television network Telecinco broke the news on Wednesday, after one of its cameras filmed Mr Comín’s phone as he read the texts during a visit to the Belgian town of Leuven the previous night.

On Tuesday, the Catalan parliament was in limbo after speaker Roger Torrent postponed the session during which Mr Puigdemont was expected to attempt to become president again, despite his exile. He was known to be planning to use either a substitute in the chamber to represent him from afar, or video link, both of which options have been deemed unlawful by Spain’s constitutional court.

The postponement revealed disagreement between Mr Puigdemont’s Together for Catalonia (JxCat) coalition and the Catalan Republican Left (ERC) over his candidacy. An ERC parliamentarian, Joan Tardà, had previously suggested that the independence movement might have to “sacrifice” Mr Puigdemont and choose another candidate for president to be able to form a government and avoid further resistance from the judiciary.

In one of his texts, Mr Puigdemont wrote: “We have been sacrificed by our own people. At least I have. You will be members of parliament (I hope and expect), but I am already sacrificed just as Tardà suggested.”

In the last of several messages, Mr Puigdemont appeared to say he was withdrawing from politics to concentrate on his legal affairs. “This has now come to an end and I must dedicate my life to my own defence,” he said.

A source close to Mr Puigdemont did not deny the veracity of the messages but told The Irish Times that they were “just some partial sms [messages] in a longer conversation” and had been taken “out of context”.

The source also said Mr Puigdemont’s current point of view was that expressed in a video message to his supporters on Tuesday, in which he called for unity and insisted he should remain as presidential candidate.

Responding to the media reports about his text messages on Wednesday, Mr Puigdemont was defiant.

“I am human and there are moments when I have doubts,” he wrote on Twitter. “I am also the president and I will not be intimidated or go backwards, out of respect, thanks and commitment to the people of [Catalonia]. We go on!”

Unionist parties welcomed the news of the text messages. “It’s obvious that Puigdemont, even though he doesn’t realise it, has been a political zombie for a long time,” said Rafael Hernando, spokesman of the governing Popular Party (PP).

Ana Rosa Quintana, the presenter of the programme on which the messages were made public, said that “with today’s exclusive, the independence process is dead”.