Europe Letter: Belgians see Brexit Britain as inexplicably turning its back on its friends 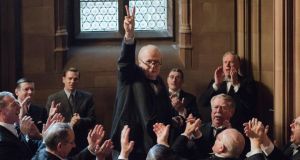 Gary Oldman as Winston Churchill in Darkest Hour: Brussels has huge affection and gratitude for the British

As our plane gently bumped down in Sofia the other day there was a round of applause from about a third of my fellow passengers. It is a disconcerting habit that seems to suggest landing safely is an achievement deserving special acknowledgment, a worrying sign of a collective lack of confidence in pilots’ ability to do the most basic of their tasks.

The subtext of applause in the cinema, also sometimes jarring, is, however, somewhat different. The actors and director are not there to hear the tribute, so the clapping more often expresses audience members’ desire to signal to each other a shared approval of what they see as the film’s message or spirit – in essence a political act.

On Saturday afternoon I joined a full house in Brussels for a showing of Darkest Hour, the new tribute to Winston Churchill’s role in mobilising an uncertain Britain to take on Hitler in mid-1940 rather than sue for peace. To my surprise the film’s closing credits were met with sustained applause. And it’s a phenomenon, with some standing ovations, that has also been reported at UK screenings of the film.

Brexit has  generated not a little exasperation at what is seen as a self-inflicted wound, inexplicably aggravated by British politicians at every turn

In the Daily Mail Max Hastings, the journalist and historian of Britain’s military and empire, attributes such displays of enthusiasm at the film’s we-shall-fight-on-the-beaches rhetoric to “the perception of a chasm between the language of the Greatest Englishman, and the faltering, apologetic, banal and frequently craven pronouncements of the politicians of today”.

Churchillian exceptionalism notwithstanding, he is certainly right that the film has resonances of today’s politics. But in Belgium I suspect that the applause was actually more a spontaneous expression of affection for Britain. This is at a time when, for most people here, it is inexplicably turning its back on friends and allies in the sauve qui peut spirit of the foreign secretary Lord Halifax, going it alone as Churchill precisely refused to do.

Emmanuel Macron talks to Andrew Marr on the BBC

That was a time when Belgium had surrendered and France was close to defeat, and several hundred thousand British troops were being rescued from the beaches at Dunkirk.

Some memories don’t die, and the truth is that there is a huge reservoir of affection – and, yes, gratitude – here for les Britanniques. Malgré tout. Brexit has also generated bewilderment, and not a little exasperation, at what is seen as a self-inflicted wound, inexplicably aggravated by British politicians at every turn.

France’s president, Emmanuel Macron, was at the military academy in Sandhurst last week to build bridges – metaphorical bridges, although Boris Johnson got the message wrong and proposed building a real one between Calais and Dover – and Macron’s BBC interview was like all those Belgians I meet who shake their heads, mystified, and ask “why?”

A clearly pained Anglophile, he was setting out the negotiating options that the Brits keep narrowing with a weary, more-in-sorrow-than-in-anger tone. This was hardly the scheming Frenchman out to do down the plucky Brits, that perennial of the tabloids.

In the face of bitter hostility and savage caricature in the British press, European politicians now preface their Brexit comments with assurances of deep and abiding affection

But, in the face of bitter hostility and savage caricature in the British press, it has become more and more de rigueur for European politicians and citizens to preface their Brexit comments with assurances of deep and abiding affection.

So there was Leo Varadkar, no less, emoting in Strasbourg last week to MEPs about the closeness of the relationship between us and them, telling stories of how his parents lived in England, where they fell in love. Of how many of his family still lived there, and even had British passports.

Cross the line and you can even get in trouble by misjudging the mood, as my colleague Denis Staunton discovered in his London Letter last Friday. Poking gentle fun at his London neighbours – but there’s no typeface for irony – he had suggested that being greeted as “mate” was akin to the burning of Cork by the Black and Tans. Only to precipitate an avalanche of indignant abuse on social media. How dare he recycle such anti-British bile? Etc, etc, in the same vein. Give me a break.

Which is precisely why Brexit is so painful, to us, their fellow Europeans; as Donald Tusk, quoting the old song, put it, breaking up is hard to do.

But will they believe us? Not a chance, mate.