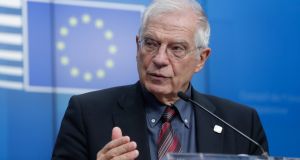 EU foreign affairs chief Josep Borrell: told journalists ships deployed under Operation EU Active Surveillance would be withdrawn if there was any evidence of them acting as a “pull factor” for migrants. Photograph: Stephanie Lecocq/EPA

Human rights groups have criticised an announcement by the EU that it will deploy naval assets in the Mediterranean to monitor the Libyan arms embargo, but will deliberately try to avoid being a “pull factor” for refugees and migrants trying to escape the war-torn north African country.

“Instead of doing the right thing, or even the bare minimum, EU leaders are saying explicitly they do not want to save lives at sea. Enforcing [the] arms embargo is necessary to minimise carnage in Libya but it’s not a zero sum equation. [The] EU can enforce embargo and address (the) humanitarian crisis in Libya and in the Mediterranean,” she said.

The EU’s current military mission, Operation Sophia, stopped deploying ships to the Mediterranean last March. That mission was devoted to rescuing migrants at sea and its name referenced a baby girl born to a rescued Somali woman aboard a German navy ship in 2015. It saved the lives of about 50,000 people.

The mandate of the new mission, Operation EU Active Surveillance, will be to police the Libyan arms embargo.

On Monday, Josep Borrell, the EU’s foreign affairs chief, told journalists ships deployed under Operation EU Active Surveillance would be withdrawn if there iwas any evidence of them acting as a “pull factor” for migrants.

Died in the Mediterranean

Nearly 100 refugees and migrants have died in the Mediterranean Sea since the beginning of 2020, bringing the number who have drowned since 2014 to almost 20,000.

“The EU decision to end Operation Sophia appears to consider people drowning at sea an acceptable price to prevent arrivals in Europe,” the international medical charity Médecins Sans Frontières said in a tweet on Tuesday.

MSF works in Libya and also operates a rescue ship in the Mediterranean, the Ocean Viking. “Put human lives first. We need a search and rescue capacity and a disembarkation mechanism that gives people a chance to apply for asylum,” the agency said.

Conflict erupted in Tripoli in April 2019, after eastern general Khalifa Haftar ordered his self-styled Libyan National Army to take control of the capital city from the UN-backed Government of National Accord. Attempts to broker a ceasefire have failed, with a UN panel of experts saying in December that an arms embargo is being systematically violated.

It remains to be seen whether the new naval deployments will last. Last year, European University Institute researchers Matteo Villa and Eugenio Cusumano released work showing there was no statistical correlation between whether there were ships in the Mediterranean capable of carrying out rescues and the number of attempted sea crossings.

Mr Villa questioned how the new EU operation would decide whether it was providing a “pull factor”.

“Do we do a study or are there just politicians claiming that more migrants are departing?” asked Mr Villa. “Conditions on the ground are so bad that people want to depart anyway.”