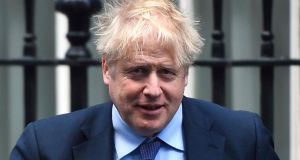 A Downing Street adviser has been forced to quit after attracting criticism for his comments on eugenics and whether black people on average have lower IQs.

The development came after Boris Johnson’s spokesman repeatedly refused to say on Monday whether the British prime minister agreed with the position of Andrew Sabisky, a “contractor” hired to work for Dominic Cummings, Mr Johnson’s closest adviser.

No 10 confirmed that Mr Sabisky had quit after he said on Twitter: “Hey all, The media hysteria about my old stuff online is mad but I wanted to help HMG not be a distraction.

“I know this will disappoint a lot of ppl but I signed up to do real work, not be in the middle of a giant character assassination: if I can’t do the work properly there’s no point, & I have a lot of other things to do w/ my life.”

In the earlier briefing with journalists, the prime minister’s spokesman declined to answer more than a dozen times whether Mr Johnson agreed with the position of Mr Sabisky.

“The prime minister’s views are well documented and publicised,” his spokesman said, adding that Downing Street would not be commenting on Mr Sabisky’s role, his beliefs or the process around his hiring.

It is good that Andrew Sabisky has quit. Eugenics has no place in government. However, by refusing to condemn these views, Boris Johnson revealed so much about his own character. https://t.co/576DCbMccS

#KayBurley - Are you comfortable with Andrew Sabisky, who openly believes in eugenics, working in Downing Street?

George Eustice(Environment Sec) - I'm not going to get drawn on that... that's a matter for Dominic Cummings. pic.twitter.com/MuZmrPE91R

The Conservative MP Caroline Nokes wrote on Twitter on Monday afternoon: “Cannot believe No 10 has refused to comment on Andrew Sabisky. I don’t know him from a bar of soap, but don’t think we’d get on ... must be no place in government for the views he’s expressed.”

Number 10’s refusal to distance Mr Johnson from the adviser came as the government faced a backlash from some Tory MPs over the increasingly centralised operation being run from Downing Street by Mr Cummings.

The decision to hire Mr Sabisky, a self-described “super forecaster” who has spoken of the need to have “universal contraception” to prevent a “permanent underclass”, may also raise questions over the prime minister’s judgment.

Anti-racism campaigners have accused Mr Johnson himself of pushing racial stereotypes as a journalist and columnist. In 2002, he described black people as “picaninnies with watermelon smiles” while two years ago he likened Muslim women wearing burkas to “letterboxes” and “bank robbers”.

During the British election in December the prime minister apologised for any offence caused by his previous comments.

Mr Sabisky’s exact role in government was unclear. Reports suggested he was hired as part of Mr Cummings’ drive to bring “weirdos and misfits” into government, while Downing Street insiders said he was a “contractor” working on forecasting. His role covered the government’s strategic defence review, as well as other policy areas.

Government officials said he had attended several meetings with Mr Johnson in recent days. Number 10 declined to comment on whether Mr Sabisky had gone through the typical vetting procedures for special advisers. Mr Sabisky did not respond to a request for comment.

In a 2016 interview Mr Sabisky defended his views on eugenics. “Eugenics are about selecting ‘for’ good things. Intelligence is largely inherited and correlates with better outcomes: physical health, income, lower mental illness,” he told Schools Week.

In a tweet, he also said he hasd always been “straight up in saying that women’s sport is more comparable to the Paralympics than it is to men’s”. In a 2014 online comment from an account in Mr Sabisky’s name, he suggested black people had IQs at or below 75, “close to the typical boundary for mild mental retardation”.

The opposition Labour party had called on Mr Johnson to sack Mr Sabisky, while some Conservatives were also privately critical.

“Would a minister survive if remarks like that came to light?” asked one government official.

“I don’t know what’s going on, but no one wants to get involved even though it looks bad,” said a minister. – Copyright The Financial Times Limited 2020