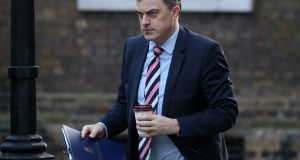 British prime minister Boris Johnson has reshaped his government to concentrate more power in 10 Downing Street after Sajid Javid resigned as chancellor of the exchequer and Julian Smith was sacked as Northern Ireland secretary.

Mr Javid resigned rather than agree to fire all his advisers and replace them with people chosen by No 10, terms he said “no self-respecting minister” would accept.

“It is crucial for the effectiveness of government that you have people around you who can give you clear advice, as I have always sought to do. I would urge you ensure the treasury as an institution retains as much credibility as possible,” Mr Javid wrote in his resignation letter to the British prime minister.

Mr Javid’s resignation follows weeks of tension between his staff and Mr Johnson’s chief adviser Dominic Cummings, with both sides briefing against one another to the media. Mr Cummings wants all political advisers to report directly to No 10 as part of a move to centralise decision-making within government.

Mr Johnson has appointed Rishi Sunak, a 39-year-old rising star in the Conservative Party and a committed Brexiteer, to succeed Mr Javid as chancellor. He takes over just four weeks before Mr Javid was due to deliver his first budget.

Mr Smith’s sacking as Northern Ireland secretary was met with surprise and some criticism in Dublin and Belfast. He was replaced on Thursday evening by former Conservative chairman and minister Brandon Lewis, the 48-year-old MP for Great Yarmouth.

Taoiseach Leo Varadkar said Mr Smith was “one of Britain’s finest politicians of our time” and Minister for Foreign Affairs Simon Coveney said that without the outgoing secretary of state’s leadership he didn’t believe Stormont would have been restored.

“You have been such an effective secretary of state for Northern Ireland at a time of real challenge and risk,” he said. SDLP leader Colum Eastwood said the sacking was a strategic error that demonstrated Mr Johnson’s “dangerous indifference” to Northern Ireland.

“It defies belief that after the successful restoration of powersharing following a three-year collapse, Julian Smith’s reward is a cabinet office P45,” said Mr Eastwood. “It tells you all you need to know about Boris Johnson’s attitude to the North that he would sack the most successful secretary of state in a decade.”