The Irish Times view on Libya’s conflicts: A test for the EU as peace-broker 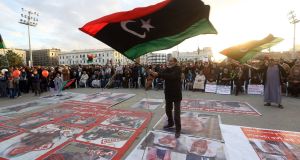 Demonstrators wave flags and step on posters of some world leaders as they take part in a rally against eastern Libyan strongman Khalifa Haftar and in support of the UN-recognised government of national accord (GNA) in Tripoli on Friday. Photograph: Mahmud Turkia/ AFP

Libya could become a new Syria in the intensity of its conflicts and as a cockpit for regional and big power rivalries unless more serious efforts are made to create a framework for peace-making there. On Sunday, contending forces of the United Nations-backed government of national accord in the capital Tripoli and those led by Gen Khalifa Haftar surrounding the city partially observed a ceasefire called for by their respective supporters Turkey and Russia. Their initiative came from one of several recent summits, reflecting the different European and Middle East interests and ideology running through Libya’s conflicts.

In the years since its leader Muammar Gadafy was overthrown in 2011 following a Nato intervention led by France and Britain, Libya disintegrated into regional, tribal, political and religious factions who fought for control. It is a large, strategic and oil-rich country bordering Egypt, Sudan, Chad, Niger, Algeria and Tunisia and sharing Mediterranean geopolitical space with Italy, France, Spain and their European Union bloc. The disintegration makes it the primary locus for migration across the Mediterranean, and has resulted in the development of a deeply inhumane detention camp regime there run by militias.

The latest military, strategic and political competition reflect all these contending interests and ideologies. Gen Haftar’s forces control most of eastern Libya and his campaign against the government in Tripoli is backed by Egypt, Saudi Arabia and other opponents of the Muslim Brotherhood and Islamist groups he says dominate it. Russia, France and the US tacitly support him too, while Turkey and the EU favour the government of national accord led by prime minister Fayez al-Sarraj. A further arena of conflict focuses on maritime resources and gas pipelines in the Mediterranean highlighted in competing economic summitry last week.

Creating a peace-making framework to head off conflict and stabilise Libya matters hugely. Russia and Turkey seek to fill the strategic gaps left by the US’s disengagement from Libya and its preoccupation with Iran. Despite their differences on Libya, both powers have an interest in upstaging the EU as a peace broker and initially they seemed to be getting their way, amid policy disarray and political transition in Brussels.

Libya is a real test for the new European Commission, which proclaims itself to have a geopolitical mandate, notably in the EU’s Mediterranean and Middle East neighbourhoods. It is to be hoped that the signs of a more active EU role to consolidate this ceasefire with renewed diplomatic and political negotiations to bring various Libyan forces together will bear fruit. That will require a much firmer effort to find a common EU basis for these talks.

1 Mother and two children found dead at south Dublin house
2 Cork shootings: Gardaí find lengthy apparent suicide note on one of the dead men
3 Johnson’s Brexit Bill set to be blocked by House of Lords
4 Róisín Ingle: Five ways to find joy in a pandemic. Only one of them is illegal
5 Michael McDowell: We must check if this Covid-19 lockdown is really necessary
Real news has value SUBSCRIBE