Playing immigration card will not pay off in general election 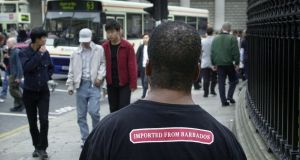 Various Eurobarometer surveys indicate a negative trend in the attitudes of native Europeans towards immigrants. In the late 1980s a Eurobarometer survey indicated that 30 per cent of respondents believed there were too many foreigners in their country; 10 years later this figure had increased to 41 per cent.

Anti-immigrant sentiment has taken the form of violent protests and riots in countries such as France and there has been a notable rise in support for far-right political parties in Europe. For people who vote for right-wing populist parties research shows that perceived threats to community and identity are more decisive than economic grievances.

Although foreign nationals in Ireland accounted for almost 13 per cent of the Irish population compared with an average of just over 10 per cent in the majority of European Union countries in 2019, there are reasons why this is unlikely. Attitudinal trends from European Social Surveys between 2002 and 2018 show that positive attitudes regarding the impact of non-Irish nationals on the economy, culture and society has, despite the dip after the financial crisis in 2008, generally risen.

Arguably these trends may reflect the overwhelmingly European origin of these, accounting for 73 per cent of all non-Irish nationals. It may also reflect the strong economic performance of recent years as employment and real wages have increased to well above European averages. Even so, it appears that a negative perception of the impact of immigrants is relatively weak at about 15 per cent of respondents in 2018.

Recent protests in rural locations against direct-provision centres in 2019 such as at Oughterard, Roosky, Moville and Achill may seem to indicate a growth in anti-immigrant sentiment, but these are relatively isolated incidents.

About 7,000 asylum seekers were living in direct provision or emergency accommodation in November 2019 but this represents only 1 per cent of all non-Irish nationals. Thus protests over direct-provision centres are likely to remain localised and unlikely to spill over to any significant degree into national politics.

Positive views of the impact of immigrants on the economy, culture and society are lower among rural dwellers (country village and country side) and never exceed 45 per cent, compared with more than 50 per cent of urban dwellers (city, suburbs and towns). Nevertheless it is notable that positive sentiment regarding the impact of immigrants has increased over the period 2002-2018 in both urban and rural locations.

Indeed, political parties both small and large that aim for broad-based support across Irish society would stand to lose more votes from adopting an anti-immigrant platform. While there is possibly some room for Independent political candidates to gain votes from playing the immigrant card this is likely to remain localised and context-bound – at least for the present time.

Unlike recent national elections in many other European countries, anti-immigrant sentiment is unlikely to feature as a significant vote-getter in the general election, particularly for the mainstream political parties.