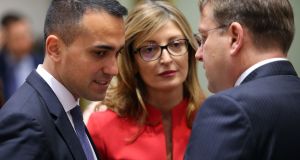 The EU will deploy a naval and aerial mission to the eastern Mediterranean to police the UN embargo on arms to Libya.

Foreign ministers meeting in Brussels on Monday broke an embarrassing deadlock that seemed certain to stymie an EU pledge following the recent Berlin summit on Libya to deploy naval assets. Clearly relieved, EU officials saw the decision as an important affirmation of the EU’s ability to project itself militarily.

Austria, which had been vetoing the proposal, had insisted the deployment of ships off the Libyan coast would act as a “pull factor” encouraging migrants to cross the sea in the knowledge they would be rescued and placed on European soil.

Prime minister Sebastian Kurz has championed the anti-immigrant cause domestically in a bid to recapture ground taken by the far-right Freedom Party, but his coalition Green partners have expressed strong support for rescue missions.

The EU ministers agreed on Monday to deployment to the eastern Mediterranean and interception of ships carrying arms in an area where the UN embargo is “being broken systematically”, EU high representative for foreign policy Josep Borrell said.

People smugglers are said by the EU military staff to be operating off central and western Libya. Should there subsequently be evidence the new mission is creating a “pull factor” for migrants the ships will be withdrawn,  Mr Borrell told journalists.

He said he personally did not believe there was any evidence of a “pull factor” – Monday’s compromise formula will mean Austria will not now be able to wield its veto on the operation as a clear majority will be required to withdraw it.

Mr Borrell said the details of the mission would be fleshed out at the foreign ministers’ meeting next month and he expected it to be deployed by the end of March. A significant number of states had offered assets.

Ireland, which had been involved in Operation Sophia, the precursor of the new mission but devoted to rescuing migrants at sea, has not said whether it will be involved. Sophia has been wound up and the new mission will have a mandate related to the embargo, although Mr Borrell insisted that “the law of the sea does not change” – if EU ships come across migrants at risk they will be rescued. To where they will be taken is not clear.

Following strong demands from several ministers that the EU take a clear stand against expected Israeli annexations of Palestinian lands in the Occupied Territories, in line with the Trump peace plan unveiled last month, ministers agreed the issue would be discussed as a formal agenda item at their next meeting.

Mr Borrell told journalists they “could not accept annexations” and that ministers would come up with proposals on what to do on the issue in March.