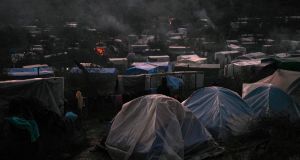 The makeshift camp set up next to the Moria refugee camp on the island of Lesbos, Greece. A charity says the country is denying adequate medical care to refugee children in the camp. Photograph: Aris Messinis/AFP via Getty

Greece’s government has been urged to order an immediate evacuation of more than 100 sick children from a notorious refugee camp on Lesbos.

Médecins Sans Frontières (MSF) accused Athens of “deliberately depriving” at least 140 minors of adequate medical care for what it described as chronic, complex and life-threatening diseases and said it was urgent they were moved to the mainland or to other EU member states.

“We see many children suffering from medical conditions such as diabetes, asthma and heart disease, who are forced to live in tents, in abysmal, unhygienic conditions, with no access to the specialised medical care and medication they need,” said Dr Hilde Vochen, MSF’s medical coordinator in Greece.

Greece’s centre-right administration withdrew access to the public health system for asylum seekers and undocumented migrants within weeks of its election last year. MSF said the move had left more than 55,000 people without proper medical care, and it said conditions on Lesbos were “horrific and inhumane”.

Rates of refugee arrivals to the Aegean islands are at their highest since March 2016 when when the EU struck an accord with Turkey to contain the flows.

There are now more than 42,000 asylum seekers on the isles, more than half of those on Lesbos. Camps across all the Aegean outposts, including Leros and Kos, were designed to host a total of 5,400 people.

Mayors from Lesbos, Samos and Chios arrived in Athens on Thursday to demand that authorities remove people from the vastly overcrowded facilities on the frontline isles. On Wednesday residents there took part in mass demonstrations, in a fresh sign that local communities have reached breaking point. Gathering along the seafronts of all three isles, protesters chanted “We want our islands back, we want our lives back.”

The renewed surge has put pressure on the government under Kyriakos Mitsotakis, the prime minister, who was catapulted into office in July promising to bolster border patrols and send a message of deterrence to people-smugglers targeting Greece.

Although the migration minister, Notis Mitarakis, has called decongestion of the Aegean outposts a priority – a message he is expected to reinforce when he meets the visiting mayors and travels to the islands this week – moving men, women and children to new camps on the mainland is proving trickier than expected.

“Transfers can’t keep apace with arrivals,” said Stella Nanou, a spokeswoman for the United Nations refugee agency in Athens. “Even in the depths of winter, people fleeing war and persecution keep crossing the Aegean.”

In September 10,551 people arrived in Greece, more than any other part of the EU. This week France said it would accept 400 refugees to help alleviate the burden.

Greek government officials who have sought to internationalise the problem say it can only be resolved if asylum seekers are shared equitably among all EU member states. – Guardian