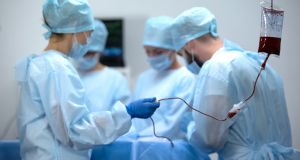 Blood plasma therapies harness antibodies in the blood of someone who has fought off the viral infection. File photograph: Getty

Doctors in Shanghai are using infusions of blood plasma from people who have recovered from the coronavirus to treat those still battling the infection, reporting some encouraging preliminary results, a Chinese professor said on Monday.

The epidemic is believed to have originated in a seafood market in the central city of Wuhan, capital of Hubei province. It has so far killed 1,770 people and infected more than 70,000 in mainland China.

China’s financial hub of Shanghai on Monday had 332 infected cases, one of whom died in recent weeks. Lu Hongzhou, professor and co-director of the Shanghai Public Health Clinical Centre, said that 184 cases were still hospitalised, including 166 mild cases, while 18 were in serious and critical conditions.

He said the hospital had set up a special clinic to administer plasma therapy and was selecting patients who were willing to donate. The blood would be screened to check for other diseases like hepatitis B or C, he added.

“We are positive that this method can be very effective in our patients,” he said.

There are no fully licensed treatments or vaccines against the new coronavirus and the process of developing and testing drugs can take many months, even years.

As well as using plasma therapies, which harness antibodies in the blood of someone who has fought off the viral infection, doctors are also trying antiviral drugs licensed for use against other infections to see if they might help.

A senior Chinese health official said on Friday 1,716 health workers have been infected by the coronavirus and six of them had died. More than 87 per cent of infected medical workers were in Hubei. – Reuters