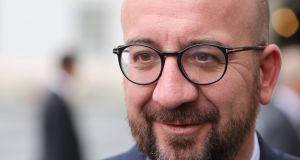 Hoping to broker a difficult budget compromise between EU net contributors and recipients for next week’s summit, European Council president Charles Michel has proposed a new budget of €1,094 trillion for the next seven years.

The draft budget for 2021-2027, or “negotiating box”, which represents some 1.074 per cent of total EU gross national income, is pitched a long way short – about €40 billion – of the commission’s ambitions.

It says it needs 1.14 per cent of GNI, and the European Parliament wants 1.3 per cent, to implement the new ambitious programmes member states have demanded, including climate spending, cash for settling migrants, defence and the digital economy and the preservation of expensive old programmes such as Cap and cohesion funding.

But in the context also of a Brexit deficit of some €12 billion a year, getting the net contributor countries – the frugal five of Austria, Denmark, Germany, the Netherlands and Sweden – to cough up even for this compromise remains hugely problematic. The large block of “Friends of Cohesion” countries remain adamant that they must be allowed to catch up and that their payments must not be cut.

Mr Michel has spent the past few weeks involved in direct bilateral meetings with all of the leaders of the 27, and officials close to him were on Friday saying they thought his package would run at the summit. There was, they said, wins for all member states to sweeten a bitter pill.

“We are not expecting states to be happy, but degrees of dissatisfaction are key,” one senior official said.

Leaders have been told to pack their bags to stay for several days beyond the scheduled Thursday meeting – Mr Michel is determined to press on for agreement through several nights of talks if necessary.

Ireland will be represented by Taoiseach Leo Varadkar. Although now a net contributor to the budget, Ireland has made clear it accepts that the budget must rise and it will have to pay significantly more.

Mr Michel’s proposed compromise, which comes close overall to that proposed by the Finnish presidency before Christmas, creates new opportunities for greater flexibility in the use of cash in both the farm budget and in cohesion funding. In the latter it provides for some €6 billion in transfers from the richer recipients to the lesser developed regions.

In the Cap budget, he is proposing to allow states to transfer cash from direct payments to farmers (known as Pillar 1), which have been increased from the Finnish proposal, to rural development payments (Pillar 2). That should allow Pillar 1 to survive largely intact, officials claim, a prospect that should reassure Ireland.

The commission had sought to phase out politically sensitive rebates to the big payers. To keep them on side, Mr Michel proposes a system of lump-sum payments, which would be negotiated individually with capitals.

Among the other innovations in the Michel proposal is the suggestion that member states should recapitalise the European Investment Bank by some €100 billion – €10 billion of it in cash grants from capitals – to allow for the leveraging of up to €500 billion in new investment.

Mr Michel is also proposing to take some of the strain off member states by proposing two new “own resources” taxes levied across the EU – a carbon tax and a tax on disposable plastic, which together should raise some €14 billion.