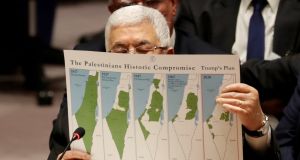 Palestinian president Mahmoud Abbas has suffered an unexpected defeat in the United Nations Security Council after the Trump administration exerted strong pressure on members to shelve a resolution rejecting the US proposal to end the Palestinian-Israeli conflict.

This reversal followed Mr Abbas’s emotional appeal to the council to condemn as one-sided the White House’s “deal of the century”.

He argued that the Trump plan would legitimise Israeli settlements in Palestinian territory occupied by Israel in 1967, allocate Palestinians disconnected cantons in 70 per cent of the West Bank and prevent them from establishing their capital in East Jerusalem.

Holding up the map accompanying the plan, he said: “This is the state that they will give us. It’s like Swiss cheese.”

Defeat of the resolution was unexpected. Two years ago the council adopted a UN General Assembly resolution condemning the administration’s recognition of Jerusalem as Israel’s capital.

The failed resolution’s final text said the proposal “departs from the internationally-endorsed terms of reference and parameters” mandating the establishment of a Palestinian state within the 1967 borders with East Jerusalem as its capital. The resolution did not mention the US authorship of the plan.

To gain support of at least nine out of 15 members to secure approval, this version had been watered down from the initial draft. That text charged the US with putting forward a plan that “breaches international law and the internationally-endorsed terms of reference” for resolving the conflict. Since the weaker text did not receive the necessary support, the US did not have to cast a veto, risking criticism and isolation.

Before his council appearance, Mr Abbas received support for his rejection of the plan from the Arab League, the Organisation of the Islamic Conference and the African Union.

UN secretary general António Guterres reiterated the organisation’s commitment to two states “living side by side” within the 1967 boundaries. European Union foreign policy chief Josep Borrell warned Israel not to carry out the annexation of the Jordan Valley, as provided for in the Trump plan, and rejected other provisions.

Ahead of the council meeting, Palestinian protests against the plan erupted in the West Bank and Gaza. Prime minister Mohammad Shtayyeh told the throng gathered in Ramallah: “All Palestinians people and all factions, national and Islamic, are standing behind president Mahmoud Abbas. All the streets are full. This is the Palestinian response.”

A survey of Palestinian opinion found that 94 per cent of Palestinians oppose the Trump plan. The survey, conducted by Ramallah-based Palestinian Centre for Policy and Survey Research, also found that Palestinians’ backing for the two-state solution had fallen to 39 per cent, the lowest since the Oslo peace accords were signed in 1993.

While 65 per cent supported Mr Abbas’s pledge to cut all relations with Israel, including security co-operation, 68 per cent believed he would not implement the threat. According to the survey, 64 per cent favour the resumption of armed struggle in a new intifada, or uprising.