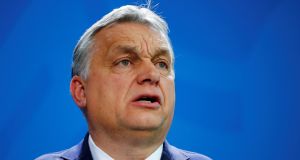 Hungary’s government plans to hold a survey of citizens’ views on issues including how schools and prisons are run, after it was ordered to pay compensation in court rulings that angered nationalist prime minister Viktor Orban.

He says previous “national consultations” on matters such as migration, relations with the EU and the alleged influence of liberal philanthropist George Soros strengthened his mandate for “illiberal” policies; Brussels has launched legal action over reforms that it sees as a threat to the rule of law.

Mr Orban denounced recent court decisions that the government should pay compensation to Roma families whose children suffered discrimination and segregation, and to prisoners who were held in unsatisfactory conditions.

He said last month that the state would not make either payout, before reluctantly agreeing to compensate the prisoners. Government lawyers are appealing in the case of Roma families in the village of Gyongyospata, and officials have offered additional training courses for the children instead of cash.

Gergely Gulyas, Mr Orban’s chief of staff, said the survey would be sent out to Hungarian homes next month to gauge public opinion on these and other issues.

He did not reveal the wording of the questions, but said they would be “about restoring moral order” in Hungary. “The government has a clear answer and opinion about these issues, but needs social support for it,” Mr Gulyas added.

Mr Orban has aimed his hard-line policies at migrants, the homeless, liberal NGOs and the Soros-funded Central European University, which moved most of its operations from Budapest to Vienna as a result.

The UN human rights office described Hungary’s 2015 national consultation as “absolutely shocking” and “fundamentally discriminatory” for linking migration with terrorism, and critics see the latest survey as another bid to demonise easy targets.

Lydia Gall, senior researcher on eastern Europe and the western Balkans at Human Rights Watch, said it “smacks of anti-Roma sentiment and contempt for rule of law”.

“This is Orban’s way of further dismantling the rule of law by pointing to the results of racist and anti-rule of law questionnaires, justifying changes to laws. We have seen it before. Another waste of public money,” she tweeted.

“According to Orban, Roma kids getting damages for being unlawfully segregated flies in the face of the ordinary Hungarian’s sense of justice . . . Repeating age-old prejudice against Roma.”

After his government was ordered to pay a total of about €300,000 to the families of 60 Roma children who were given inferior teaching and excluded from certain classes and activities, Mr Orban defended the local ethnic Hungarian majority and accused NGOs and lawyers of fleecing the state.

“Non-Roma in Gyongyospata began to feel that they had to back down and apologise, despite being the majority . . . They feel like they are in a hostile environment in their own homeland,” he said.

“I’m not from Gyongyospata, but if I lived there, I would ask what’s going on. For some reason, members of an ethnic group living in the same community will receive a significant amount without having to work, while I [would] have to slave all day for that money . . . How come?”