Latin American bishops recommendation had alarmed conservatives in the church 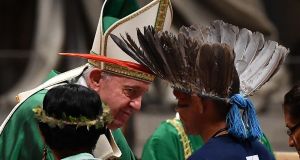 Representatives of one of the Amazon Rainforest’s ethnic groups (front) take part in Pope Francis’ Mass at St Peter’s Basilica in the Vatican, for the opening of the Special Assembly of the Synod of Bishops for the Pan-Amazon Region in October 2019. File photograph: Tiziana Fabi/AFP via Getty

Pope Francis, in one of the most significant decisions of his papacy, on Wednesday dismissed a proposal to allow some married men to be ordained in the Amazon region to ease an acute scarcity of priests.

The recommendation, put forward by Latin American bishops last year, had alarmed conservatives in the deeply polarised 1.3 billion-member Roman Catholic Church, who feared it could lead to a change in the centuries-old commitment to celibacy among priests.

Francis delivered his response in an Apostolic Exhortation, three months after the proposal passed by 128 votes to 41 at a contentious Vatican assembly, or synod, of Roman Catholic bishops.

Apostolic Exhortations are used to instruct and encourage the Catholic faithful but do not define church doctrine.

Wednesday’s 32-page document did not even mention the proposal, which was for older married deacons who are proven leaders of remote Catholic communities and have stable families to be ordained as priests.

Conservatives balked, fearing that even a circumscribed change would be a slippery slope leading to a married priesthood throughout the church. They branded a pre-synod working document as heretical.

In what some viewed as a strategically timed appeal to Francis not to approve the Amazon proposal, a book published last month by church conservatives defended the tradition of priestly celibacy.

“From the Depths of Our Hearts” was co-authored by Cardinal Robert Sarah and former pope Benedict, though Francis’ predecessor subsequently disassociated himself from the project.

Vatican officials said the pope completed the document on December 27th, before the book controversy, and handed it in for translations. They said no changes were made after that.

In the Exhortation, the 82-year-old Argentine pope wrote, new ways must be found to encourage more priests to work in the remote region, and allow expanded roles for lay people and permanent deacons, of whom the Amazon needed “many more”.

Deacons, like priests, are ordained ministers. They can preach, teach, baptise and run parishes, but they cannot say Mass. Married men can become deacons.

Because only priests can say Mass, people in at least 85 per cent of Amazon villages cannot attend the liturgy every week and some cannot do so for years.

“This urgent need leads me to urge all bishops, especially those in Latin America ... to be more generous in encouraging those who display a missionary vocation to opt for the Amazon region,” he wrote.

He used the first three chapters of the document to defend the rights and legacies of indigenous people and the environment in the Amazon, which had to be protected because of its vital role in mitigating global warming.

Conservatives feared that if Francis had taken up the proposal, other areas with a shortage of priests would follow, even in developed countries such as Germany, where the issue is being discussed. – Reuters