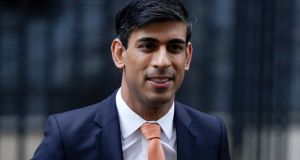 Rishi Sunak leaves 10 Downing Street on Thursday after being appointed chancellor of the exchequer. Photograph: Will Oliver/EPA

The new British chancellor of the exchequer has arrived in No 11 via public school, Oxford and Goldman Sachs – not an unusual route to one of the highest offices of state but a leap from his grandparents’ home in India.

Rishi Sunak’s grandparents had come from the Punjab and emigrated to Britain from east Africa in the 1960s.

Sunak was born in 1980 in Southampton to a father who was a family GP and a mother who ran a “tiny” chemist’s shop, where he occasionally worked. He has spoken in interviews of his awareness of three identities: British, Indian and Hindu.

He was educated – and head boy – at Winchester College (motto: manners makyth man), one of the UK’s seven top public schools, and went on to study philosophy, politics and economics at Oxford University, a well-trodden path into government.

He later earned an MBA from Stanford University in California, where he was a Fulbright scholar.

While at Stanford, Sunak met his wife, Akshata, the daughter of NR Narayana Murthy. An Indian billionaire, Murthy made his fortune as the co-founder of Infosys, a vast international technology firm that employs more than 240,000 staff. Sunak and Akshata Murty have two daughters.

Sunak’s website highlights his role co-founding an investment firm, a reference probably to Theleme Partners, a hedge fund he helped set up in 2009.

The brief biography does not mention his previous roles, which included work as an analyst at the Wall Street investment bank Goldman Sachs and a stint at another hedge fund, the Children’s Investment Fund Management. He was also a director of the investment firm Catamaran Ventures, owned by his father-in-law.

Sunak was selected as the Conservative candidate for Richmond in October 2014 after the constituency’s MP, the party’s former leader William Hague, stood down. Sunak backed the UK’s exit from the EU during the 2016 referendum.

When Boris Johnson became prime minister last year, he appointed Sunak to the high-profile post of chief secretary to the Treasury.

Despite his rapid elevation to the role of chancellor, after the surprise resignation of Sajid Javid, he narrowly misses out on being the youngest person ever to hold the position: George Osborne was 38 when he took the job; Sunak is 39.

His website is relatively light on detail but he says he enjoys keeping fit, cricket, football and films.

Sajid Javid was the first UK chancellor in 50 years to fail to deliver a single budget, when he dramatically resigned on Thursday after just seven months.

He shares this probably unwanted place in history with fellow Conservative Iain Macleod. Macleod died in July 1970 – just a month after being appointed, aged 56, after having a heart attack after an operation.

His death came as a shock, and a blow to prime minister Edward Heath, who hailed Macleod as a courageous “master of oratory” in the Commons the next day.

It was Macleod who invented the term “stagflation” in 1965, to attack the rising prices and weak growth delivered by Harold Wilson’s government.

Javid was not, however, the shortest-serving chancellor: he outlasted Randolph Churchill, who barely managed four months in 11 Downing Street before resigning because the cabinet would not back his only budget in a row over military spending cuts. – Guardian