Humiliation of Paris mayoral candidate a blow to Macron 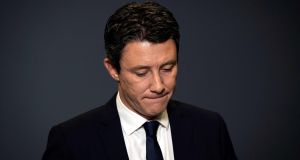 French president Emmanuel Macron’s La République en Marche on Friday scrambled to find a replacement candidate to represent the party in Paris for the next month’s municipal elections.

Benjamin Griveaux, a close acolyte of Macron, stepped down as LREM’s candidate on Friday, after a compromising video and text messages allegedly sent by him to a woman who is not his wife were posted on the internet.

“An internet website and social media have relayed ignoble attacks on my private life,” Mr Griveaux said in a emotional message recorded at the Agence France Press. “My family does not deserve this. No one should ever be subjected to such violence.”

Mr Griveaux’s lawyer, Richard Malka, said he would “sue all publications who violated the privacy” of his client.

Mr Malka also defended Dominique Strauss-Kahn, the former head of the IMF, when Mr Strauss-Kahn was cleared of pimping in a 2015 trial.

Mr Griveaux was once an aide to Mr Strauss-Kahn, whose career ended when he was accused of assaulting a hotel maid in New York in 2011.

Mr Griveaux was a co-founder of En Marche and Mr Macron’s campaign spokesman, before becoming government spokesman. His humiliation is a blow to Mr Macron, and all but destroys the president’s hopes of seeing a close ally in the Paris town hall.

When Mr Griveaux spoke to Mr Macron by telephone late on Thursday, the president reportedly left him the choice of maintaining his candidacy or withdrawing.

Other LREM politicians are not eager to enter what appears to be a losing battle. Marlène Schiappa, the minister for gender equality, declined to replace Mr Griveaux. Health minister Agnès Buzyn said she “could not be a candidate” because of her heavy workload.

Some party members want to see Cédric Villani, the dissident candidate who was expelled by LREM two weeks ago, replace Mr Griveaux.

The video and texts were posted on a little known pornographic website by Piotr Pavlenski is a Russian contemporary artist and publisher of the journal Po, a Russian citizen, opponent of President Vladimir Putin and political refugee in France. Mr Piotr Pavlenski received a three-year prison sentence, of which two years were suspended, for attempting to set fire to the Banque de France in 2017.

Mr Pavlenski said he posted the video and texts to denounce the hypocrisy of politicians “who lie to their voters and impose puritanism on society while being contemptuous of it themselves”.

Mr Griveaux spoke often of his wife and children during the campaign. The screen of his smartphone shows a photograph of his children.

Mr Pavlenski said he received the video and texts from a woman who had an affair with Mr Griveaux. He claimed to be “1,000 per cent certain” of their authenticity.

The French political class reacted with near unanimous outrage. Several politicians denounced the “Americanisation” of French political life. US congressman Anthony Weiner resigned in 2011 after sending photographs of his sex organs to women.