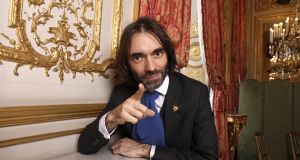 The dissident candidate for mayor of Paris, Cédric Villani, expressed support for his former rival Benjamin Griveaux, less than two hours after Emmanuel Macron’s candidate pulled out of the race on Friday in a sex video scandal.

“I address my full support to Benjamin Griveaux and his family in this trial,” Villani tweeted. “The disgraceful attack against him is a serious threat to our democracy.”

It cannot have escaped Villani’s notice that he stands to gain most from the collapse of Griveaux’s campaign, after intimate messages and images attributed to Griveaux were posted on the internet.

Villani declared himself an independent candidate two months later. On January 29th, Macron summoned Villani to the Élysée and ordered him to desist. Villani refused. “I was up against the logic of a party machine that contradicts the original promise of the party,” Villani explained in a group interview with the Anglo-American Press Association this week.

Villani says there is “neither separation, nor rupture, nor opposition” between himself and Macron. If he becomes the next mayor of Paris, Villani promises to maintain “constructive and free” relations with the president. “Paris needs to co-operate with the government, but at the same time keep a certain independence,” he said, condemning the “sterile confrontation” between Macron and the incumbent Socialist mayor, Anne Hidalgo.

It is difficult to see how LREM could endorse Villani, two weeks after it expelled him for insubordination. But Villani professes loyalty to the principles of the party: European federalism, the rejection of left-right polarisation, environmentalism and especially the need to open politics to civil society.

There was significant overlap between Villani and Griveaux’s programmes. Villani is the obvious fallback candidate for Griveaux’s voters. When combined, their poll numbers put Villani ahead of the front-runner, Hidalgo.

Until Friday, Villani (46) appeared unlikely to be the next mayor of Paris. “My candidacy will succeed,” he insisted in our meeting. “I am stubborn, as my scientific career has shown. The Fields Medal (the equivalent of a Nobel prize for mathematics, which Villani won in 2010) seemed like Mission Impossible . . . It showed how tenacious and ambitious you have to be when you want to change the world.”

Villani is the most colourful of the remaining front-runners, and, as he points out, the only candidate who is not a professional politician. He has chosen non-politicians, including entrepreneurs and the head of a humanitarian organisation that helps refugees, to head his lists in individual districts.

As a parliamentarian, Villani drew up a landmark report on artificial intelligence

An old-fashioned watch chain hangs on Villani’s waistcoat. His long hair, beard and the silk bows he often wears around his neck lend him the air of a 19th century romantic poet or composer.

Villani stood for our interview, bouncing on his tall, wiry frame, stroking the air with spidery fingers. With each question, he fixed the intense gaze he inherited from Greek-Corsican and north African pied noir ancestors on his interlocutor. He laughed easily and often.

Villani has a long list of achievements, but describes himself simply as “involved in politics since 2010, in European federalism”. He served on two scientific committees for the EU Commision, and in 2017 joined Macron’s En Marche movement.

As a parliamentarian, Villani drew up a landmark report on artificial intelligence. He organised Macron’s admission that the French army murdered the communist mathematician Maurice Audin during the Franco-Algerian war. Macron took Villani with him on official trips to Africa, China and the US.

The capital is bogged down in the decades-long, €40 billion Grand Paris project. As Villani notes, it has become a “complex, illegible, inefficient muddle which is braking the resolution of many problems”. He thinks Paris is an equation he can solve, mainly by enlarging its frontiers to encompass 28 towns beyond the ring road.

Paris has not been enlarged significantly since 1860, under Napoleon III, Villani notes. “We’re an anomaly compared to all other major international cities. Paris is separated from its suburbs by a physical border, the périphérique. Berlin, London and New York have a broader vision. They have in a way integrated suburbs into the city.”

Villani has worn a spider broach on his lapel for the last 15 years. Some are gifts from supporters. He has bought others from artisans in far-flung countries.

“Despite their bad reputation, spiders are marvellous creatures, extraordinarily useful to mankind,” Villani explains. “If you did away with spiders, agriculture would collapse everywhere. Their physiological characteristics are amazing, the solidity of their silk.”

Last month, Iranian scientists named a newly discovered species of spider Araniella villanii, after the mathematician. “But spiders are poisonous!” a journalist objects. Villani laughs again. “A little poison can be useful in politics.”