Democratic primaries: All still to play for in New Hampshire 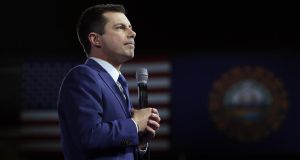 As political theatre it had it all.

On Saturday night, the great and good of the state Democratic party crowded into a vast indoor arena in downtown Manchester, New Hampshire. Ever since John F Kennedy spoke at the dinner in 1959, the 100 Club event has become a staple of the Democratic presidential calendar.

As local supporters munched on hotdogs and popcorn, and feel-good 1980s pop blasted from speakers, the state’s more well-heeled and well-connected attendees enjoyed a seated meal at dining tables arranged around the make-shift stage. In one corner of the arena crowds holding illuminated Bernie signs shouting “Bernie beats Trump” faced off with yellow-clad Buttigieg supporters on the other side yelling “Boot-Edge-Edge”. Elizabeth Warren had an impressive supporters’ section, dwarfing the adjacent Joe Biden contingent. But all were there for the same reason – to see the line-up of Democratic candidates hoping to become the party’s nominee to take on Donald Trump in November’s presidential election.

As New Hampshire prepares to hold its primary contest on Tuesday, the eyes of the country are turning to this small New England state. New Hampshire has long been the first state in the nation to hold a primary, traditionally just after Iowa holds its slightly-different caucus format. But the debacle of the Iowa caucuses, which saw delays and confusion mar the process, has upped the stakes for New Hampshire.

Its outcome has also injected a new dynamic into the contest. Political newcomer Buttigieg’s narrow victory in Iowa has propelled the 38-year old former mayor into the top tier, with polls showing him catching up with front-runner Bernie Sanders in New Hampshire. The last few days have seen the escalation of inter-party attacks and negative campaigning. Even before candidates took to the stage at the 100 Club dinner on Saturday, tensions had been building. An ABC News debate on Friday night saw the candidates launch their most direct attacks yet on each other, with Amy Klobuchar, Joe Biden and Bernie Sanders focusing much of their energy on Buttigieg.

On Saturday, Biden launched a digital ad directly questioning Buttigieg’s experience. The ad mockingly contrasted the former vice president’s achievements on the world stage with Buttigieg’s track record as mayor of South Bend, noting that his achievements included laying decorative bricks on sidewalks. It also highlighted one of Buttigieg’s biggest weakness – his lack of support among non-white communities.

Mr Biden’s direct challenge to his younger rival was seen by many as ill-advised given that Buttigieg defended Biden during Friday’s debate when asked about Biden and his son Hunter’s involvement in the Ukraine controversy.

‘Reduced to a punchline’

Despite efforts at unity on Saturday night – the annual 100 Club dinner is supposed to be about New Hampshire Democrats putting their best foot forward as they look ahead to November’s elections – tensions were on display.

Buttigieg, first on the stage, tackled his critics straight on. “Now I know some are asking, what business does a South Bend mayor have seeking the highest office in the land?” he began, to cheers from the Buttigieg camp.

In a play on the famous Ronald Reagan riposte to Walter Mondale in 1984 – “I am not going to exploit, for political purposes, my opponent’s youth and inexperience” the septuagenarian Reagan replied to a question about his age – Buttigieg noted that he did not have “decades” of establishment experience.  Instead, he hailed from the midwestern town of South Bend, a place “more like Manchester, New Hampshire,” he said. “That is very much the point, because Americans in small rural towns, in industrial communities… are tired of being reduced to a punchline by Washington politicians.”

Supporters in the Sanders’ section responded with boos and jeers, drowning out Buttigieg at one point as he warned of the dangers of revolution. “With a president this divisive, we cannot risk dividing Americans further by saying that you must either be for a revolution or for the status quo,” he implored over the din.

Biden, for his part, steered clear of any criticism of Buttigieg during his five-minute segment on Saturday. Though his supporters were outnumbered, the crowd displayed a respectful silence when he took to the stage, as he delivered a speech peppered with anecdotes about struggling Americans he had met on the trail and focusing on the threat posed by Donald Trump.

The other primary candidates also took their moment in the spotlight, waving to supporters and giving the thumbs-up sign to the crowd as they delivered a curtailed version of their stump-speech. For the front-runners in the Democratic race, Saturday’s appearance was just the latest in many visits to the State. Some, like Elizabeth Warren and Bernie Sanders, have had ground staff in place in New Hampshire for the best part of a year.

The latest CNN/University of New Hampshire poll published on Saturday puts Mr Sanders ahead with 28 per cent support, up from 25 per cent in mid-January. But Mr Buttigieg is gaining ground, and now stands at 21 per cent compared to 16 per cent last month. Much of Mr Buttigieg’s increase appears to come from former Joe Biden supporters, one reason for the rise in tension between the two men.

But the figures are also disappointing for Elizabeth Warren. The senator from neighbouring Massachusetts is polling in fourth place at 9 per cent in the latest poll. Though her national support peaked late last summer, in autumn her polling numbers began to wane in part because of her initial support for a government-funded healthcare plan, a position she later nuanced.

Earlier on Saturday at a Warren event in Manchester Community College, the 70 year-old senator bounded on to the stage with her trademark energy. “Are we ready for big structural change?” asked Warren. Though several hundred supporters had gathered to hear her story, the numbers could not compete with the overflowing crowd greeting Buttigieg further west across the state.

Nonetheless, many in the room remained committed to Warren. “She’s the only one to me who has a plan. She comes to the table with something,” said 38-year-old Katie Pastora who travelled from New York to campaign for the weekend. Devon Taylor (37) agreed. “I like her story a lot, I like where she’s come from. She also looks at problems and tries to bring practical solutions to the table. She’s both aspirational and realistic.”

Are they disappointed with the results of the Iowa caucuses? “I’m more disappointed by the press coverage of her to be honest with you,” said  Katie. “It’s basically erasing her from the narrative. It’s like Buttigieg, Sanders and then Biden – as if third place didn’t exist.”

For these die-hard Warren supporters, New Hampshire still offers an opportunity for their candidate to pick up momentum, even as the rivalry between the three men at the top of the race looks set to dominate the narrative.

For those battling it out in the Granite State, it’s all to play for in the coming days.