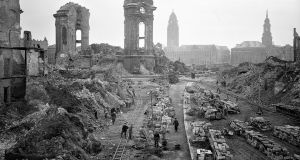 Some 800 British bombers dropped 1,400 tonnes of explosives and phosphorous bombs over the Saxon capital. About 25,000 died, many asphyxiated as the flames sucked up all oxygen. Photograph: AFP/Slub Dresden Deutsche Fotothek/ RIchard Peter Sen

His intervention in an unfurling political crisis, triggered last week by the far-right Alternative für Deutschland (AfD), came as Dresden remembered the fire bombing of the city 75 years previously.

Some 800 British bombers dropped 1,400 tonnes of explosives and phosphorous bombs over the Saxon capital that night, and the city once known as “Florence on the river Elbe” – previously spared bombing – was engulfed in a firestorm.

About 25,000 people died, many asphyxiated as the flames sucked up all available oxygen.

“We must contradict, loudly and decisively, those who try to offset the dead of Dresden with the dead of Auschwitz, and who falsify facts against their better judgment,” said Mr Steinmeier. It was a pointed reference to the latest flare-up in a 75 year-old propaganda war over Dresden.

In 1945, while the city still smouldered and the Red Army approached from the east, historians say the National Socialists exploited the tragedy by inflating the death toll tenfold.

Later the supposedly “anti-Fascist” East German authorities adopted the Nazi numbers and narrative of the firebombing of Dresden as a cultural and humanitarian war crime.

Modern historians concede that city was filled with refugees, raising troubling questions about civilian targets, but flag how more people were killed in lesser-known fire bombings, such as Hamburg.

And while architectural and cultural riches beyond measure were destroyed 75 years ago in Dresden, historians point out how the city was a rail and industry hub and thus crucial to the Nazi war effort.

In recent decades, neo-Nazi groups have challenged what they see as revisionist attempts to minimise Allied war guilt. At annual events they inflate the death toll and have invited former SS men to speak.

This year’s anniversary of February 13th, 1945, in Dresden was co-opted for the fourth time when the far-right AfD party weighed in. It suggests the death toll was four times the 25,000 victims estimated by a recent historical commission – prompting protest from local politicians and historians.

“It’s important to remember and mourn the dead,” said Johannes Schütz, a historian at Dresden’s Technical University, to the Tagesspiegel daily. “But when you start relativising German guilt, only point to German victims and leave out that this was a war of aggression that originated in Germany, then this is no longer legitimate.”

To strong applause in the Saxon capital, Mr Steinmeier delivered a pointed warning about the current political crisis gripping Germany. It began a week ago in the state parliament of neighbouring Thuringia, when centre-right parties elected a new state premier with AfD support.

“When elected parliamentarians embarrass and make a fool of the parliament in which they sit,” said Mr Steinmeier, “it is an attempt to destroy democracy from the inside.”