Brexit: British in Germany get uneasy as uncertainty grows

Some of the 100,000 Brits living in Germany fear a post-Brexit future as European pawns 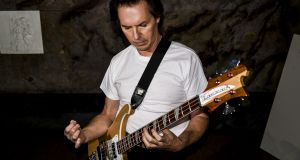 Martin Gordon, a British musician and a new German, is worried about how serious London is about safeguarding citizens’ rights. Photograph: Mehmet Dedoglu

After living in Berlin for 19 years, he moved quickly to apply for a German passport and, last December, found himself in a Berlin town hall swearing an oath to his adoptive home.

“I’ve never become German before so in that sense it a novelty,” he jokes. “My grandfather was gassed in the first World War by the Germans, so he’d be surprised that, many years later, his grandson would be joining the people he once fought.”

But behind the humour, he says, is rage: at the uncertainty facing him, 100,000 other British citizens in Germany and some 1.3 million more across Europe – not to mention the three million EU citizens living in Britain.

Last year they were all living examples of European unity; now they fear a future as pawns in a political battle between London, Brussels and other EU capitals.

A day before prime minister Theresa May triggered the two-year Brexit procedure, groups representing these people scored a pre-emptive strike: a sit-down meeting in Brussels with the EU’s chief Brexit negotiator, Michel Barnier.

As Brexit talks finally begin, all of these groups – British in the EU and EU citizens in Britain – are determined to stick together in the looming fight.

Berlin-based lawyer Jane Golding of the “British in Europe”, a coalition of 12 citizens’ groups across the EU, was encouraged by what she calls a “very positive” meeting.

When they asked Barnier if he was optimistic or pessimistic of securing their rights in talks, the European commissioner told them he was “determined”.

“He said our rights were the first priority in negotiations, ahead of budgets and borders,” said Golding, with similar priority expressed by London.

The EU chief negotiator’s priority is to have agreement in principle on citizens’ rights by the year end, leaving 2018 to agree on the complex details.

The task now, according to Golding, is to keep ramming home in the public debate the plight of four million people on our continent who are living with uncertainty.

“These are working people who just don’t know what they can do next, who can’t move country or job. They are retired people concerned access to healthcare may come to an end,” she said.

The Brexit vote has prompted anguished soul-searching, and a spike in Irish citizenship applications from British citizens with Irish heritage.

Daniel Tetlow, a British filmmaker, is resisting German citizenship on a point of principle.

“I am not rushing to become a German citizen, I want to stand strong and be British in Germany,” said Tetlow. But, living with a German partner and young child in Berlin, he admits his principles are “getting a little wobbly”.

Beyond current optimism that their rights will eventually be guaranteed, what leverage do EU and British citizens’ groups have if talks break down and they are thrown under a bus?

“We are in for the long haul,” said Golding of British in Europe. “If we don’t get that we will just keep raising our profile and we will get the public on our side.”

Martin Gordon, a 59-year-old British musician and new German, remains worried about how serious London is about safeguarding citizens’ rights.

“I’m with Frank Zappa on this,” he said. “Stupidity, not hydrogen, is the building block of the universe. And the people who went for Brexit would be the stupid building blocks.”