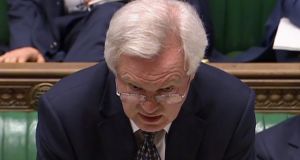 The British government wants to create sweeping new powers that would allow it to amend thousands of European Union laws it is transferring into UK law ahead of Brexit. The changes will be part of the Great Repeal Bill, which will also repeal the 1972 European Communities Act, which brought Britain into the EU.

Unveiling a white paper on the Bill in the House of Commons on Thursday, Brexit secretary David Davis said it would provide clarity and certainty for people and businesses as Britain leaves the EU.

“Once EU law has been converted into domestic law, parliament will be able to pass legislation to amend, repeal or improve any piece of EU law it chooses – as will the devolved legislatures, where they have power to do so,” he said.

“However, further steps will be needed to provide a smooth and orderly exit. This is because a large number of laws – both existing domestic laws and those we convert into UK law – will not work properly if we leave the EU without taking further action. Some laws, for example, grant functions to an EU institution with which the UK might no longer have a relationship.”

Mr Davis said that the government would have the power to “correct the statute” to ensure that laws would make sense outside the context of Britain’s EU membership. He said the measure, which would be temporary, was necessary because the sheer number of laws, regulations and directives involved would take MPs years to amend with normal parliamentary scrutiny.

“I can confirm this power will be time-limited. And parliament will need to be satisfied that the procedures in the Bill for making and approving the secondary legislation are appropriate. Given the scale of the changes that will be necessary and the finite amount of time available to make them, there is a balance to be struck between the importance of scrutiny and correcting the statute book in time,” he said.

Opposition parties condemned the move as a “power grab”, a complaint which was echoed by the devolved administrations in Scotland and Wales. Labour’s shadow Brexit secretary Keir Starmer said that nobody underestimated the scale of the task of transposing the body of EU law into UK law. But he said Mr Davis had failed to offer adequate safeguards on the sweeping powers the government was adopting.

“We have to go back to first principles. There should be no change to rights and protections without primary legislation – that is a starting and basic principle – and the same goes for policy. I add this: when we see the Bill, it must give no power to change rights, obligations and protections by delegated legislation,” he said.

During the debate, Mr Davis appeared to promise MPs a vote on Britain’s withdrawal from the European Economic Area (EEA) as well as from the EU. But a statement issued by his department later on Thursday said he had not intended to give that impression.

“We will not be a member of the single market or the EEA. Once we leave the EU, the EEA Agreement will no longer be relevant for the UK. It will have no practical effect. We therefore do not envisage a vote. We are considering what steps, if any, might need to be taken to formally terminate the EEA Agreement as a matter of international law. That is what the secretary of state was referring to in the House and we will of course keep parliament fully updated,” it said.