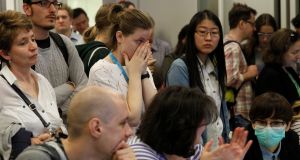 Students and faculty of the Central European University in Budapest listen to the school’s rector, Michael Ignatieff, address a town hall meeting after the government tabled a new Bill that could force the school out of Hungary. Photograph: Bernadett Szabo/Reuters

The acclaimed Central European University has said it will have to leave Hungary if populist prime minister Viktor Orban pushes through reforms that are allegedly part of a campaign against liberal philanthropist George Soros.

Mr Soros founded CEU in Budapest in 1991, as part of efforts to foster democracy, transparency and civil society in the former communist bloc. The billionaire financier also funds NGOs in Hungary and the region that pursue the same goals.

Though he received a grant from Mr Soros in his student days, Mr Orban now accuses him of trying to undermine Hungary’s government and fuelling illegal migration, which the premier has called a threat to Europe’s security and identity.

“After careful legal study, CEU has concluded that these amendments would make it impossible for the university to continue its operations as an institution of higher education in Budapest,” CEU said in a statement.

Michael Ignatieff, the president and rector of CEU, added: “Any legislative change that would force CEU to cease operation in Budapest would damage Hungarian academic life and negatively impact the government of Hungary’s relations with its neighbours, its EU partners and with the United States. ”

Messages of support for CEU – whose 1,440 current students hail from 108 countries – came from academic institutions across Europe and from the United States.

“The United States opposes any effort to compromise the operations or independence of the university.”

The proposed reforms would tighten restrictions on foreign-registered educational institutions in Hungary, and could create significant problems for CEU, potentially forcing it to change its name and to be subject to a new bilateral agreement between the US and Hungary.

This could be particularly problematic given Mr Soros’s outspoken criticism of both Mr Orban and US president Donald Trump.

While Mr Orban hailed Mr Trump’s election as the dawn of a new political era, Mr Soros called the US property magnate “a con artist and would-be dictator”.

Szilard Nemeth, the deputy chairman of Fidesz, said Mr Trump’s election created the “international conditions” for Soros-funded groups to be “swept out” of Hungary. Mr Orban, meanwhile, declared that 2017 “would be about squeezing out the forces symbolised by Soros.”

His government denied that the education reform targeted CEU, however.

“With Soros, and the organisations funded by him in the region, the government has a major disagreement over policies regarding illegal migration. The government of Hungary is not alone in this disagreement. But this and the education review procedure are two separate matters,” the government said in a statement.