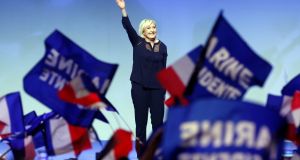 There will be no jubilant crowds waving blue-and-gold European flags and singing Beethoven’s Ode to Joy in French streets on Saturday to mark the 60th anniversary of the Treaty of Rome.

France always prided herself on being the cradle of the fathers of Europe, Jean Monnet and Robert Schuman. Until German reunification in 1990, Europe was largely a French creation.

“The EU can survive without the UK,” says Douglas Webber, professor of political science at Insead business school in Fontainebleau. “But if France leaves, Europe will be missing not just a foot, but an arm and a leg and a good part of the torso. It would be political revolution on the highest measure of the Richter scale.”

A Le Pen victory is not probable, but it is possible. And the mere possibility is spooking Brussels and the financial establishment.

Le Pen portrays the two-round presidential election as the replay of May 29th, 2005, when 54.68 per cent of French voters rejected the constitutional treaty drafted by the former French president Valéry Giscard d’Estaing. A few days later, 61 per cent of Dutch voters did the same. The EU never fully recovered.

Nicolas Sarkozy “betrayed the will of the people”, Le Pen says, by asking the French parliament to ratify a subsequent version of the constitution in the Lisbon Treaty.

This time, Le Pen swears, “the will of the people will not be confiscated”. Reclaiming French “monetary, legislative, territorial and economic sovereignty” from Brussels is number one on her list of 144 campaign promises.

The French constitution would have to be changed, either by referendum or a three-fifths majority in both houses of parliament, to leave the EU or the euro. Le Pen has promised to hold a referendum six months after the election. She has not made clear if there would be one referendum on the euro and the EU, or two.

In recent years, German prosperity, French decline and the characters of their respective leaders have made it impossible to hide the imbalance in power between the two countries at the heart of Europe.

Le Pen has capitalised on what she describes as French subjugation to Germany. At the European Parliament in Strasbourg in October 2015, she addressed chancellor Angela Merkel and president François Hollande, saying: “Thank you, Madam Merkel, for coming to visit us with your vice-chancellor, the administrator of the province France. Monsieur vice-chancellor, I would have liked to call you ‘Monsieur the president of the republic’, out of respect for your position, but you do not fulfil that function.”

Yet German financial rigour and British and American-style economic liberalism have been largely discredited. Austerity is out of fashion. The European Central Bank is printing money. The euro zone has shown solidarity with Greece. Jean-Claude Juncker has replaced the ultra-liberal José Manuel Barroso at the head of the European Commission, and Juncker has launched a massive investment plan. The commission is forcing Apple to pay tax in Ireland. There is talk of relaunching European defence.

As pointed out by Le Monde’s columnist Arnaud Leparmentier, these are all “French ideas”. But France, in its present uncertainty, is not able to capitalise on them.

The best-case scenario for Europhiles is that Emmanuel Macron, the centrist former economy minister, will defeat Le Pen on May 7th. Opinion polls indicate that is the most likely outcome.

Macron’s European policy replicates the unrealised goals of his former boss, Hollande: a government, parliament and budget for the euro zone, common fiscal and social rules and more investment.

“The only source of hope for change for the better in Europe would be a more solidly, unreservedly pro-European German chancellor and a French president more able to act than Hollande has been,” Webber says.

If Macron wins on May 7th, and the socialist leader Martin Schulz wins the German election in September, “it would create the conditions for the revival of the European project”, Webber adds.

The alternative Le Pen scenario is referred to by French bankers as a “black swan” or improbable, cataclysmic event. This was summed up by a banker in a cartoon published by Le Monde as “on a scale going from the fall of the Roman empire to Armageddon.”

Experts say a “Frexit” could spread to Italy, Portugal, Spain and Greece.

If Le Pen’s score is particularly high in the first round on April 23rd, when she is expected to lead, bankers fear a dramatic escalation in capital flight. If she wins the May 7th run-off and announces a referendum on leaving the euro, long queues are expected at ATMs. Exchange controls would certainly follow.

François Villeroy de Galhau, the governor of the Banque de France, said last month that if France renounced the euro, interest on the French debt would increase by €30 billion annually.

Economists predict the French franc would lose between 10 and 30 per cent of its value, shrinking French retirement accounts and inducing mass inflation.

Le Pen’s strategy has been elaborated by Bernard Monot and Jean-Richard Sulzer, both qualified economists. She denounces dire forecasts as fear-mongering by her opponents. And if a Le Pen election victory ended up destroying the euro and the EU, well that’s exactly what she had in mind.