‘We must fight them’: Trump declares war on party’s Freedom Caucus 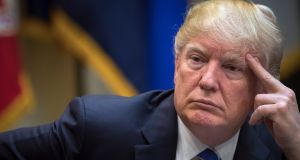 President Donald Trump: Over the past few days, he has lurched between battering and buttering up conservatives who killed his healthcare overhaul. Photograph: Stephen Crowley/The New York Times

President Donald Trump on Thursday declared war on the conservatives of the House Freedom Caucus, suggesting Republicans should “fight them” in the 2018 mid-term elections if they do not back his agenda.

“The Freedom Caucus will hurt the entire Republican agenda if they don’t get on the team, & fast,” Mr Trump said on Twitter on Thursday morning, escalating a fight that began when the conservatives from the caucus blocked his healthcare law repeal last Friday.

“We must fight them, & Dems, in 2018!” Mr Trump wrote, apparently making good on suggestions that he would support Republican challengers to lawmakers in his own party who oppose him, a stance advocated by his chief strategist, Stephen Bannon.

Calls to members of the caucus were not immediately returned. Over the past few days, Mr Trump has lurched between battering and buttering up conservatives who killed his healthcare overhaul in an agenda-scuttling insurrection that imperils his plans for tax reform and a trillion-dollar infrastructure package.

On Wednesday – about 18 hours before Mr Trump’s Twitter attack – senior officials from the White House invited two dozen leaders from conservative groups for a closed-door session to plot a path ahead. Participants, who were instructed by the organisers of the event not to divulge details of the meeting, or even the groups attending, described the hour-long sit-down as a welcome, but long overdue, policy discussion.

The Freedom Caucus will hurt the entire Republican agenda if they don't get on the team, & fast. We must fight them, & Dems, in 2018!

It included a candid, polite airing of complaints that they have been largely left out of the loop on major administration decision-making, according to people who attended.

The meeting, put together by Mr Trump’s conservative outreach director, Paul Teller, at the request of conservatives, included representatives of the Heritage Foundation, Americans for Limited Government and Judicial Watch, all of whom were critical of some administration policies, including the health Bill.

Mr Fitton, the participants said, told Mr Teller that Mr Trump needed to be committed to a policy of extreme transparency about contacts between Russian government officials and Mr Trump associates during the 2016 campaign, including Michael Flynn, the former national security adviser, and Jared Kushner, Mr Trump’s son-in-law.

He also asked Mr Teller and other administration officials present to more rapidly approve bottled-up freedom of information requests about Russia and other topics – likening the foot-dragging on legally mandated disclosure to what he said was the Obama administration’s flouting of immigration laws.

Mr Teller nodded, took notes and was noncommittal, an activist in attendance said. Rick Manning, a long-time conservative activist and former lobbyist, had worked on setting up the meeting for weeks, but it took on a greater urgency after the healthcare debacle.

Mr Trump’s Twitter post was not impulsive: Mr Bannon and his staff have been closely monitoring the president’s tweets and using them as leverage in negotiations. Dan Scavino, an aide who controls Mr Trump’s official White House Twitter account, recently moved into Bannon’s West Wing office where he closely monitors social activity by and about the president, according to two officials.

One administration official, speaking as were others on the condition of anonymity because he was not authorised to discuss the meetings, said it was a long overdue attempt to keep conservatives from criticising Trump publicly.