May hopeful of stronger relationship with Ireland after Brexit 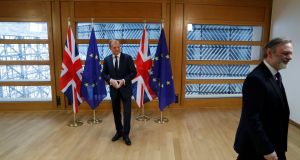 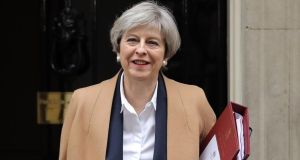 Theresa May has said that Britain’s relationship with Ireland could be stronger after Brexit and promised to make sure that the United Kingdom’s departure from the European Union would not damage the peace process in Northern Ireland.

Writing in The Irish Times a day after she formally notified European Council president Donald Tusk of Britain’s intention the leave the EU, the prime minister says she wants Britain and Ireland to remain committed partners.

“I understand the special significance of this relationship and I am personally committed to strengthening it, not weakening it, as the UK leaves the EU,” she writes.

“That is why in my letter to Donald Tusk I have made clear that one of the key principles for the negotiation ahead is that we must pay close attention to the UK’s unique relationship with the Republic of Ireland and the importance of the peace process in Northern Ireland.”

In her letter to Mr Tusk, Ms May said she wanted to avoid a return to a hard Border, to maintain the Common Travel Area, “and to make sure that the UK’s withdrawal from the EU does not harm the Republic of Ireland”.

The Government on Wednesday expressed regret at the triggering of article 50, which starts two years of Brexit negotiations, noting that it would have “significant economic, political and social implications” for Ireland.

Minister for Finance Michael Noonan spoke to his British counterpart Philip Hammond after Ms May’s announcement, reminding him that Ireland would be negotiating as part of the remaining 27 EU member states.

“We have strong relations with the EU and the UK and we are intent on maintaining both. We are very much in favour of the UK maintaining as close a relationship as they can with the European Union after the UK has left the union,” Mr Noonan said.

The prime minister’s statement to the House of Commons announcing the start of negotiations was greeted with cheers from Conservative MPs. Mr Tusk’s response was sombre, expressing sadness at Britain’s departure but emphasising the EU’s determination to succeed without it.

“I will not pretend that I am happy today. But, paradoxically, there is also something positive in Brexit. Brexit has made us, the community of 27, more determined and more united than before,” he said.

Mr Tusk said he will publish the EU’s draft negotiating guidelines on Friday, which will be finalised and approved by EU leaders at a meeting in Brussels on April 29th. In a personal message to Britain, he said: “What can I add to this? We already miss you. Thank you and goodbye.”

The British government will on Thursday outline how it will undertake the mammoth task of converting all EU law into British law before Britain leaves the EU in two years.

A white paper will set out how the government will use between 800 and 1,000 statutory instruments to correct a significant proportion of EU law that will cease to work appropriately when converted into UK legislation.

“At the heart of the referendum decision was sovereignty. A strong, independent country needs control of its own laws. That process starts now,” Brexit secretary David Davis said.

“Converting EU law into UK law, and ending the supremacy of lawmakers in Brussels, is an important step in giving businesses, workers and consumers the certainty they need.”