Trump stands by his man as media honeymoon ends

Jeff Sessions may ride out storm, but questions remain over links with Moscow 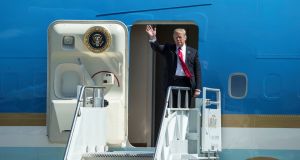 US president Donald Trump’s brief honeymoon with the media following his well-received address to Congress on Tuesday came to an abrupt halt this week with the revelation that attorney general Jeff Sessions failed to disclose previous contacts with the Russian ambassador to Washington during his senate confirmation hearing.

While Mr Sessions is ultimately expected to ride out the storm – he has stepped aside from any current or future investigations into Russian interference in the 2016 presidential election – the incident has added to concerns over links between the Trump administration and Moscow.

The issue has already cost one Trump adviser his job. Former national security adviser Michael Flynn was effectively fired by Mr Trump two weeks ago for misleading his colleagues about the nature of his phone call with the Russian ambassador in December.

This time the president is standing by his man. Shortly before Mr Sessions’s press conference on Thursday, the president said he had complete trust in his pick for attorney general, even going as far as to suggest that there was no need for Sessions to recuse himself from federal investigations into Russian hacking. Sessions is widely perceived as one of Mr Trump’s closet allies and an influential figure within the Trump administration.

The former senator from Alabama was an early Trump supporter and the first senator to back the New York businessman, giving much-needed credibility to his presidential bid.

Sessions’s former aide in the senate, Stephen Miller, left his boss to join Mr Trump’s presidential campaign, and is now a senior adviser to the president. Mr Sessions, who was known for his hardline views on immigration while a judge in Alabama, was a controversial pick for attorney general.

Senator Elizabeth Warren was famously silenced in the senate during last month’s vote on his nomination after she quoted a letter from the late wife of Martin Luther King opposing his nomination as a federal judge in 1986.

One of his first acts as attorney general was a decision to row back on measures adopted by president Barack Obama instructing schools to allow transgender students to use the bathrooms that aligned with their stated gender identity.

This week’s controversy has undoubtedly damaged Sessions – his defence that he believed he had answered a question by Democratic senator Al Franken about his contacts with Russia honestly did not quell demands by Democrats for his resignation – but the real significance is that the affair has renewed focus on Mr Trump’s ties with Russia.

Questions about Mr Trump’s relationship with Putin have dogged the president for months and are refusing to go away. The president’s persistent refusal to criticise Russia at a time when he has spoken disparagingly about other countries such as Mexico and China has perplexed many.

On Thursday the White House confirmed a report in the New Yorker that Mr Trump’s son-in-law and senior adviser Jared Kushner met the Russian ambassador in Trump Tower in New York along with Michael Flynn in December.

The purpose of the meeting was to “establish a line of communication” between the new administration and the Russian government, the White House said.

The pattern of meetings between figures in the Trump administration and Russian officials just as the FBI was preparing to announce its findings that the Kremlin was behind attempts to influence the US presidential election has raised questions.

A number of congressional committees are investigating the alleged interference by Russia in last year’s campaign. Just hours before the revelation that Mr Sessions had failed to disclose two meetings with the Russian ambassador, the House Intelligence Committee set out its terms of reference for its investigation.

Meanwhile, despite the concerns about links between Washington and Moscow, there has been no discernible shift in the new administration’s policy on Russia.

Indeed, as Mr Trump seeks to shake off the persistent questions about his relationship with the Russian government, he may be more likely not to adopt any policy shift that could be perceived as too lenient on Russia.

This could be the ultimate irony of Russia’s alleged involvement in the 2016 US presidential election.