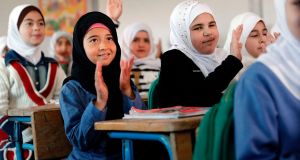 Syrian girls at the Zaatari refugee camp in Jordan, which shelters some 80,000 Syrian refugees on the border with the war-ravaged country. Photograph: Thomas Coex/AFP/Getty Images

The number of people fleeing Syria’s civil war to Turkey, Lebanon, Jordan, Iraq and Egypt has passed the five million mark, data from the UN refugee agency showed on Thursday.

Syrians have poured across their borders since anti-government protests in 2011 spiralled into a full-blown conflict between rebels, Islamist militants, government troops and foreign backers.

An initial rush of refugees in 2013 and 2014 steadied for the next two years. But the numbers have risen again this year after the military victory by the government and its Russian allies in the northern city of Aleppo.

A total of 5,018,168 people have now taken refuge in Syria’s neighbours and other countries in the region, according to data collected by UNHCR and the government of Turkey.

Millions more have fled to other parts of the country, including tens of thousands this month, mainly women and children, trying to get away from a rebel offensive northwest of the city of Hama.

Syrians have also fled to Europe in large numbers, making 884,461 asylum claims between April 2011 and October 2016. Almost two-thirds of the claims were in Germany or Sweden.

Hundreds of thousands more live in Gulf countries that are not party to the 1951 Refugee Convention, such as Saudi Arabia, Qatar and the United Arab Emirates, so they are not recorded as refugees.

A UN-led humanitarian appeal to help Syrian refugees and support host communities has received only 6 per cent of the money needed this year – $298 million out of $4.6 billion.

Separately, Syrian rebels have seized large areas from Islamic State in southern Syria in the last two weeks as the jihadist group prepares to defend its Raqqa stronghold in the north from a US-backed assault, rebel commanders say.

The advances by western-backed Free Syrian Army (FSA) factions have helped to reduce the risk of Islamic State fighters regrouping in areas near Damascus and the Jordanian border as they face major defeats in Syria and Iraq.

Western intelligence sources have worried for months that militants fleeing from their main urban strongholds of Raqqa in Syria and Mosul in Iraq could find a safe haven in the vast areas of the Syrian desert bordering Jordan.

The rebels fighting in southern Syria have received military aid funnelled via Jordan in a programme overseen by the US Central Intelligence Agency.

Their sudden gains are a culmination of months of covert operations in which they have ambushed and cut communications lines to weaken the militants’ stronghold in the southeastern border area close to Iraq, the rebels say.

“Extensive areas have fallen into our hands. [Islamic State] has been pushed out of them in heavy clashes in 16 days of battles,” said Talas al Salameh, the commander of the Osoud al Sharqiya, the biggest of the FSA groups in the area.

“[Islamic State] had cut roads and were in control and had been positioned in former Syrian army bases with a strong presence and with heavy armour. We cut links between their areas and as a result they began to retreat,” Mr Salamah said.

In northern Syria, Islamic State has come under growing military pressure in recent months from separate campaigns being waged by the US-backed Arab and Kurdish fighters, by the Russian-backed Syrian army and by Turkey-backed FSA groups.

The US-led coalition against Islamic State is backing an alliance of Kurdish and Arab fighters – the Syrian Democratic Forces (SDF) – in the campaign to isolate and capture Raqqa city on the other side of the country.

Ms Salamah said Islamic State had pulled hundreds of fighters from the areas where his group, working with four others, had made its advances, suggesting they had been redeployed to help defend Raqqa and Deir al-Zor province to the east.

The advances have taken place in a swathe of sparsely populated territory stretching from the town of Bir Qassab, some 50km southeast of Damascus, all the way to the borders with Iraq and Jordan, a desert area known as the Badia.

“In the event of the fall of Raqqa and Mosul, where would they go? They would be coming here. So we decided to work and kick them out of this area before they would come to us,” Mr Salameh told Reuters in a phone interview.

The rebels have also seized control of the eastern slopes of the Qalamoun mountains to the northwest of Bir Qassab, where Islamic State’s presence had disappeared as it moved its forces further north, he said.

The rebels say their campaign in the area had been gradually escalated over the last five months.

1 Donald Trump is in trouble, and that could spell very bad news
2 Taoiseach says €350 pandemic payment to be cut for some part-time workers
3 Varadkar says Government pushing for quicker easing of lockdown
4 O’Doherty and Waters ordered to pay legal costs of case against State over Covid-19 laws
5 Madeleine McCann case: ‘We assume the girl is dead’, German prosecutors say
Real news has value SUBSCRIBE