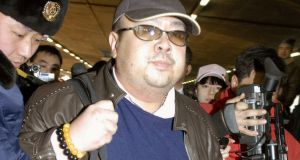 Kim Jong-nam, half-brother of North Korean leader Kim Jong-un, in a 2007 photograph. He was assassinated with a nerve agent at Kuala Lumpur airport on February 13th. Photograph: Kyodo/via Reuters

Malaysian prime minister Najib Razak said on Thursday that the body of Kim Jong-nam, half-brother of North Korean leader Kim Jong-un, has been released to North Korea, bringing an end to a diplomatic spat that escalated over nearly seven weeks.

Mr Najib said nine Malaysians barred from leaving North Korea had been allowed to board a plane to leave Pyongyang, adding on Twitter that the plane was expected to reach Kuala Lumpur at 5am Malaysian time (9pm Irish time).

The Malaysians left Pyongyang in a Royal Malaysian Air Force business jet, which headed immediately west out of North Korean airspace before turning south towards Malaysia, according to flight tracking website planefinder.net.

“Following the completion of the autopsy on the deceased and receipt of a letter from his family requesting the remains be returned to North Korea, the coroner has approved the release of the body,” Mr Najib said in a statement.

The statement did not mention Kim by name. Kim was assassinated at Kuala Lumpur airport on February 13th.

Malaysian police say Kim was killed by two women who smeared super toxic VX nerve agent on his face. An Indonesian woman and Vietnamese woman have been charged.

A joint statement by the North Korean government released simultaneously said both countries managed to “resolve issues arising from the death of a DPRK national” in Malaysia at a meeting in Kuala Lumpur.

Malaysia imposed a travel ban on North Koreans leaving the Southeast Asian country in a tit-for-tat move after Pyongyang barred Malaysians from leaving its borders.

Mr Najib said on Thursday that North Koreans will now be allowed to leave Malaysia.

North Korea were angered by Malaysian authorities, who identified North Korean suspects and wanted to question others, including a diplomat at their embassy in Kuala Lumpur.

Pyongyang has maintained that the body was that of Kim Chol as stated in his passport, and not Kim Jong Nam.

Malaysia also expelled the North Korean ambassador for being “diplomatically rude”, though Mr Najib later said that ties with Pyongyang would not be severed in a bid to calm relations.