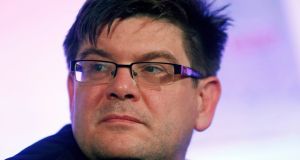 Berlin minister for housing Andrej Holm: he volunteered to join the Stasi at the age of 14. Photograph: Felipe Trueba/EPA

Berlin’s new centre-left state government is in crisis – after just five weeks in office – following the dismissal of a junior minister for concealing his links to East Germany’s Stasi secret police.

Andrej Holm (46), a left-wing academic hired to oversee public housing in the German capital, was told on Saturday he was out of a job in a bid by mayor Michael Müller to end an escalating scandal.

Days after Mr Holm was appointed in December to the Berlin city building ministry by the Left Party, junior coalition partner in the new city-state coalition, it emerged that he had been economical with the truth about his East German past.

Mr Holm is the son of a Stasi officer. He volunteered to join the agency aged 14 and, four years later, enrolled in the Stasi training school as a cadet. After completing basic training he received a Stasi scholarship to study journalism in Leipzig shortly before the fall of the Berlin Wall in 1989.

All of these ties Mr Holm concealed in 2005 when filling in a questionnaire to take up an academic position with Berlin’s Humboldt University.

That application became public shortly after he took leave to take up the ministry job. In public statements since, Mr Holm expressed regret for having signed up for the East German “system of repression” and for not being frank in 2005.

“I reported it as I remembered it,” he told a recent public meeting.

Mayor Michael Müller has declined to judge Mr Holm’s East German decisions but said his reaction when caught concealing his past suggested he was “unable to look clearly at himself and draw the consequences”.

“Especially in Berlin, which was the epitome of a divided city, there must be no doubt about the work to overcome the past,” said Mr Müller, a reference to its decades on the front lines of the cold war.

His decision to fire Mr Holm on Tuesday – unless he resigns first – prompted outrage from the Left Party, successor to East Germany’s ruling party.

In office with Mr Müller’s Social Democrats (SPD) and the Green Party, the Left Party’s leader Klaus Lederer told RBB television: “Now we have to choose between Andrej Holm and [the coalition].”

Since 1990, all German public servants have been obliged to reveal any past involvement with the Stasi. Its collapse in 1990 revealed a vast spying network of one informer to every 65 East German citizens. Their information on friends and neighbours – sometimes supplied willingly, sometimes under duress – helped swell the Stasi archives to 111km of shelf space and 40 million index cards.

Roland Jahn, custodian of the Stasi files, said “no one should be damned forever for their Stasi past”. “But we need credibility and honesty in these cases, something not evident in the Holm case.”

Berlin’s Humboldt University now has to decide if Mr Holm, a specialist in urban development and gentrification issues, can return to his post.