Communities in spotlight as Turkish nightclub killer remains on run 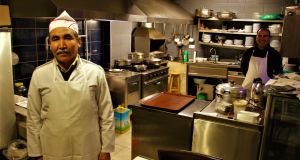 Devlet Temori: says the Uzbek community in Istanbul is not involved with Isis. Photograph: Stephen Starr 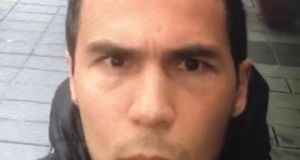 Abdulkadir Masharipov: possibly holed up in the Zeytinburnu district with his infant son. Photograph: AFP/Getty

Abdulkadir Masharipov, who shot dead 39 people in an Istanbul nightclub in the early hours of January 1st, is still on the run. The fugitive, who reportedly goes by the Islamic State nom-de-guerre Ebu Mohammad Horasani, spent the hours following the attack at an ethnic Uighur restaurant in the district of Zeytinburnu.

In the days and weeks since the attack, conflicting reports about the suspect’s identity and background have emerged. At first, police believed him to be either an ethnic Uighur or an Uzbek national, and although they appear for now to have settled on the latter, anti-terrorist squads have arrested a number of Uighurs in relation to the massacre.

With the mass murderer possibly holed up somewhere among Zeytinburnu’s 300,000 residents, reportedly with his infant son, attention is now focused on Istanbul’s Uzbek and Uighur communities. Zeytinburnu is the district from where he began his night of terror.

A similar language and relaxed visa requirements have made finding work in Istanbul less difficult for Uzbeks than is the case in the West or Russia. Here, Uzbek immigrants can also enjoy the comfort of a shared religion and history.

However, though Zeytinburnu boasts modern shopping malls and is served by a metro line that runs to Istanbul Atatürk Airport, there is a darker side to its narrow streets. The district’s proximity to the airport and central bus terminal makes it a popular stopping point for extremists – Uzbeks, Uighurs and others – travelling between their home countries and Islamic State-controlled Syria.

One of the three militants linked to Islamic State, also known as Isis, who killed 44 people, including 19 foreigners, at Atatürk airport last June was believed to be Uzbek. The Turkish authorities are aware that Uzbek extremists represent a threat, and in August 2015 they deported 12 people for attempting to cross illegally into northern Syria.

Locals estimate that about 5,000 Uzbeks live in Zeytinburnu. For Devlet Temori, for 23 years the man behind the well-regarded Özbek Sofrasi, or “Uzbek Table”, restaurant in Zeytinburnu, terrorism is something that exists outside the community.

“There are police here all the time since the attack, driving up and down the streets. And in any case I don’t think he is Uzbek; he’s Uighur,” says Temori, who is from a province in northern Afghanistan bordering Uzbekistan and who has lived among Istanbul’s central Asian communities for more than two decades.

“There are no Uzbeks here who go to Syria, to Isis,” he claims.

At the Tanridag Uighur restaurant, so named after Tengri, the god of the Turks, owner Umar Ibrahim sits and chats with customers from the local Uighur community. Soon the dated, ballroom-style restaurant is filled with central Asian couples and groups taking shelter from a snowstorm. Istanbul’s Uighurs are said to be one of the most close-knit immigrant communities in the city.

“We’re against all terrorist acts, of course. But I don’t think that he is Uighur,” says Ibrahim, who has lived in Istanbul for 11 years. “We are not more fearful [since the nightclub attack] because we share a similar culture and language as the Turks. People have sympathy for our situation with China. ”

According to Abdul Ahat of the East Turkistan Education and Solidarity Association, an Istanbul-based separatist organisation China accuses of being linked to militant Islamist groups, there are no concerns about extremism or radicalisation among Uighurs.

“There are many Uighurs in Istanbul: some are doing well, living a normal life; others find it more difficult. I don’t think there is any evidence of Isis infiltrating the community,” he said.

Four years ago, the group denied claims by China that Uighur separatists were fighting alongside al-Qaeda in Syria.

Under the AK Party and Recep Tayyip Erdogan, Turkey has supported the rights of Muslims around the world, including Uzbeks repressed for their religious beliefs and Uighurs of the autonomous Xinjiang province who have had their rights curbed by Chinese authorities. But, in a number of ways, Turkey’s lax border controls and its one-time policy of backing rebels in Syria have come back to bite it.

Whether the Istanbul killer is Uzbek, Uighur or of another background, the fact remains that before and after carrying out the atrocity, Masharipov spent an unknown, though perhaps lengthy, period in Zeytinburnu, and that almost two weeks after the massacre he remains on the loose. Notwithstanding restaurant owner Temori’s claims, the only police presence observed during a recent visit to Zeytinburnu was half a dozen officers helping to tidy up after a street market.

That the suspect first came to Turkey in 2011 and, as recently established by police, also entered the country with a fake passport in 2014 and 2015 calls into question Turkey’s security efforts.

Meanwhile, rumours continue to circulate as to the suspect’s whereabouts. A metro line close to Zeytinburnu was evacuated for a time last Wednesday following a tip-off that Masharipov had been seen there; other reports suggest he was seen at a supermarket in Bursa, a city 100km south of Istanbul.

As long as the suspect remains on the run, Uzbeks, Uighurs and Turks alike in Istanbul will continue to look over their shoulders and wonder if such killings could have been prevented.