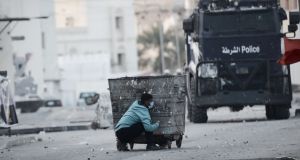 File photo taken on January 2nd, 2015 shows a Bahraini protester taking cover behind a garbage container during clashes with riot police following a demonstration against the arrest of Sheikh Ali Salman, the head of the Shiite opposition movement Al-Wefaq – in Salman’s home village of Bilad al-Qadeem, on the outskirts of the capital Manama. Photograph: Mohamed al-Shaikh/AFP/Getty Images

Three men found guilty of a deadly bomb attack on police in Bahrain have been executed by firing squad.

The executions of the Shiite men drew swift criticism from human rights groups and sparked outrage among opponents of the Sunni-ruled government, who see the charges as politically motivated. Activists allege that testimony used against the condemned men was obtained through torture.

Bahrain’s public prosecution said the death sentences were carried out by firing squad early on Sunday. The executions were the first in the US-allied nation since 2010 and followed a spike in protests in solidarity with the convicted men.

Abbas al-Samea, Sami Mushaima and Ali al-Singace were found guilty in 2015 of killing two Bahraini policemen and an Emirati officer deployed to bolster the country’s security forces in a 2014 bomb attack. Their death sentences were upheld by a Bahraini court last Monday.

Government forces crushed the 2011 uprising with help from allies Saudi Arabia and the United Arab Emirates, but the country continues to face low-level unrest led by a majority Shiite population that feels marginalised by the Sunni monarchy.

Hundreds of protesters took to the streets on Saturday in solidarity with the condemned men as rumours spread that their executions were imminent. .

Nicholas McGeehan, a researcher who monitors Bahrain for Human Rights Watch, called the executions inflammatory and unjust. He urged the kingdom’s allies to “publicly and unequivocally condemn these killings”.

Protests and clashes continued on Sunday despite a heavy presence of riot police deployed in predominantly Shiite areas.

One police officer was injured when several people shot at a police patrol in Bani Jamra, west of the capital Manama, the Interior Ministry said.

Al-Samea and Mushaima alleged they were subjected to electric shocks, beatings, cigarette burns, sleep deprivation and sexual assault while in custody, Amnesty International reported in 2015. Al-Singace’s mother says her son was also tortured, according to British rights group Reprieve.

“It is nothing short of an outrage — and a disgraceful breach of international law — that Bahrain has gone ahead with these executions,” Reprieve director Maya Foa said. “The death sentences handed to Ali, Sami and Abbas were based on ‘confessions’ extracted through torture, and the trial an utter sham.”

Reprieve claimed hundreds of prison guards at Bahrain’s Jau prison – where the executed men were detained – were trained by a Northern Ireland company.

Previously, Reprieve called on NI-CO (Northern Ireland Co-operation Overseas), which is owned by Invest NI, to suspend its contract because police and prison officers in the Middle Eastern state systematically abuse government opponents, it says.

Bahrain’s last execution was of a Bangladeshi man in 2010. A number of death sentences have been issued since then.