British Prime Minister Theresa May said on Sunday (January 8) she would set out her strategy for Brexit over the coming weeks. Video: Sky News/Sophy Ridge on Sunday 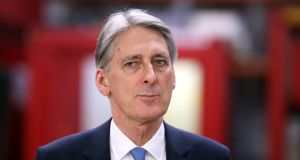 British chancellor Philip Hammond has said Britain may be forced to change its economic model if it is locked out of the single market after Brexit. Photograph: Jane Barlow/PA Wire

British chancellor Philip Hammond has infuriated German politicians for implying a “hard” Brexit would see London adopt a new role as a tax haven before the gates of the EU.

Driving speculation ahead of Tuesday’s Brexit address by prime minister Teresa May, Mr Hammond said he preferred seeing Britain remain “in the European mainstream of economic and social thinking”. “But if we are forced to be something different, then we will have to become something different,” he told Welt am Sonntag newspaper when asked if post-EU Britain would become a tax haven.

Labour leader Jeremy Corbyn said the British government risked a “trade war” with Europe and a future as “a strange entity on the shores of Europe”.

Mr Hammond’s remarks to Welt am Sonntag followed his assurances last week in Berlin that Britain would “not do anything that would undermine the EU or risk its unravelling”.

Speaking to the German Sunday newspaper, Mr Hammond said easing the economic costs of a disorderly EU departure could see Britain “forced to change our economic model and we will have to change our model to regain competitiveness”.

“You can be sure we will do whatever we have to do,” he said. “We will change our model, and we will come back, and we will be competitively engaged.”

Though not the first time since last year’s Brexit vote that Britain has floated the idea of undercutting EU neighbours on corporate tax, Mr Hammond’s bald remarks – and their timing – caused ructions in Germany at the weekend.

“Instead of threats, that exist on both sides . . . there should be an interest in common interests and concentration on a resulting compromise,” said Norbert Röttgen, CDU foreign policy spokesman.

“Instead of staging theatrical thunder it would be more sensible if Britain would finally put a coherent plan on the table as to how it views future relations,” said Alexander Graf Lambsdorff, MEP for the liberal Free Democrats (FDP).

Dr Merkel has insisted she will place European unity ahead of everything else – including German financial interests – in upcoming Brexit talks, and will block British single market access if London insists on migration controls.

Mr Hammond said the British government had yet to take a firm position on this but that it would be hard to ignore the “message the British people sent on June 23rd”.

Mr Corbyn speculated on the BBC’s Andrew Marr Show that the prime minister was aiming for Britain to be a “bargain-basement economy on the shores of Europe, where we have low levels of corporate taxation”.

“We will lose access to half our export market,” he said. “It seems to me a recipe for some kind of trade war with Europe in the future. That doesn’t really seem to me a very sensible way forward.”