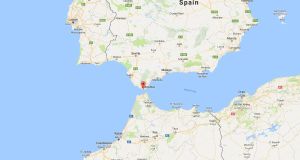 The bodies of four men and one woman were discovered on beaches and floating just off the coast of Tarifa in Spain late on Friday and through the day on Saturday. Photograph: Google Maps

Five people have been found dead off the southern Spanish coast this weekend, a Spanish police spokeswoman said on Sunday, after at least eight others were discovered off the coast of Libya on Saturday.

The bodies of four men and one woman were discovered on beaches and floating just off the coast of Tarifa late on Friday and through the day on Saturday, though it was not clear where they had travelled from, the spokeswoman said.

“Unless we find a survivor, we really don’t know what happened or even if these people were travelling on the same raft,” she said.

At least eight migrants died when their boat capsized off the coast of Libya on Saturday.

Spanish, Italian and French coastguards work together in rescue missions in the Mediterranean as thousands of migrants attempt the perilous sea crossing into Europe from Northern Africa and the Middle East on flimsy rafts and boats.

Almost 5,000 deaths were recorded last year, the deadliest year on record, according to the International Organization of Migration.