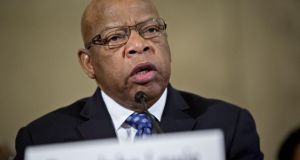 US representative John Lewis: “I believe in forgiveness. I believe in trying to work with people. It’s going to be very difficult.” Photograph: Andrew Harrer/Bloomberg

President-elect Donald Trump began a long holiday weekend that honours slain black civil rights leader Martin Luther King Jr by attacking another rights activist and politician who had said he did not see Trump as a “legitimate president.”

US representative John Lewis, a Georgia Democrat, said on a segment of Meet the Press released by NBC on Friday that he thought hacking by Russians had helped Mr Trump, a Republican, get elected in November. Mr Lewis said he did not plan to attend Mr Trump’s January 20th inauguration, the first time he would miss such an event since being elected to the House in 1986.

On Saturday the president-elect tweeted that Lewis had falsely complained about the election results and instead “should spend more time on fixing and helping his district, which is in horrible shape and falling apart (not to mention crime infested)”.

During the campaign, he said Democrats had failed African-Americans and Hispanics. “What the hell do you have to lose? Give me a chance,” he said at a rally last year in Ohio.

Mr Trump won the presidency with less support from black and Hispanic voters than any president in the last 40 years, only 8 per cent and 28 per cent, respectively, polling data showed.

Mr Lewis (76) has been a civil rights leader for more than half a century. He was beaten by police during a march he helped lead in 1965 in Selma, Alabama, drawing attention to hurdles for blacks to vote. He protested alongside King that day and on other occasions.

“I believe in forgiveness,” Mr Lewis said in the NBC segment about Mr Trump. “I believe in trying to work with people. It’s going to be very difficult. I don’t see this president-elect as a legitimate president.”

At least 10 other Democratic US politicians have also said they plan to skip the inauguration, including representatives Raúl Grijalva, Lacy Clay and Mark Takano.

Supporters of Mr Trump see him as a brash person who tells things as they are. His comments about Mr Lewis came ahead of an anti-Trump march in Washington headed by the Rev Al Sharpton. The protest by about 2,000 marchers kicked off a week of rallies planned by dozens of groups before, during and after the inauguration.

DisruptJ20, which is working with Black Lives Matter and other protest groups, said they are planning to disrupt balls celebrating the inauguration in Washington.

Michael Steele, who served as the first black chairman of the Republican National Committee until 2011, said the tweets were unfortunate.

“John Lewis has a walk that very few people in this country, least of all Donald Trump, have ever walked, so you have to respect that,” Mr Steele said on MSNBC.

If the president-elect is looking to fix a bridge to black voters, their expectation is he “will do so in a way that shows respect for our leadership”, Mr Steele said.

Senator Ben Sasse of Nebraska tweeted that “John Lewis and his ‘talk’ have changed the world.”

Some 12 hours after his first tweets against Mr Lewis, Mr Trump came back with one more recommendation for the black leader.

“Congressman John Lewis should finally focus on the burning and crime infested inner-cities of the US. I can use all the help I can get!,” he tweeted late in the day.