Downside of election result is people overeating and numbing out, says producer 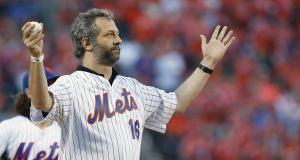 Director and comedian Judd Apatow knows how the game is played: he wasn’t as surprised by the election results as most people. Photograph: Rich Schultz/Getty Images

Donald Trump: freak or geek? Who better to answer that question than Judd Apatow, the executive producer of Freaks and Geeks and the comedian, producer, director and writer who has been in a spiral over the ascent of his fellow TV big shot and Twitter addict?

I have come to Apatow’s office – decorated with photos of jazz greats and the casts of Freaks and Geeks and Girls – to see how he’s doing. His intense, extended Twitter screed about Trump has me a little concerned. As he tweeted the other day, “How are we supposed to work when all of reality is a freeway chase?” I ask him if there’s a danger he could lose himself to the Trump monster.

“There’s a danger on the internet that you think you’re accomplishing something,” he says. “So you see an article about a disease and retweet it and think ‘It’s cured now!’ And you’ve fooled yourself into thinking that you’ve done something productive.”

He assures me that he has not been battered by pro-Trump trolls: “I’ll get insecure and go, I don’t think my career’s going that well because nobody is saying anti-Semitic things to me today.”

All of Hollywood is in a lefty swivet, of course. Barbra Streisand phoned Chris Matthews on air last Monday, in the middle of getting her teeth cleaned, to call Trump “disgraceful” for attacking Meryl Streep after Streep brushed back Trump in her Golden Globes speech.

When Trump tweeted that the nonpareil Streep was “overrated”, after naming her one of his favourite actresses in 2015, he once more showed that his opinions are tethered, in a scary, erratic way, to his highly sensitive ego. But Apatow has been particularly outspoken and agitated – as he was over Bill Cosby.

He has joked that maybe Trump’s election is his fault because he helped Jon Lovett write a belittling Celebrity Apprentice dig for President Barack Obama’s speech at the 2011 White House Correspondents’ Association dinner – a humiliating evening for Trump that some think sparked his desire to avenge himself by running for president.

As we dig into some spinach omelettes with hash browns and hot sauce that he has picked up after dropping off his daughter at school, Apatow cops to stress eating and shows off his Fitbit. “It’s very hard to lose weight in the Trump era,” says the comedian, swivelling in his chair and sporting his usual uniform of jeans, Converse sneakers and a dark polo shirt he says he wears “almost every day of the week”.

“I’m trying so hard to have it not turn into 30lbs,” he continues. “I think it tests our ability to not want to numb out. There’s so many things that are hard to hear every day that you do want to have some Oreos. Like people say, what do you invest in during the Trump era? I feel like, Hostess Cakes. Most of us are just scared and eating ice cream.”

He wasn’t as surprised by the election results as most people because he had been saying that the funnier candidate always wins. “I said it as a joke, but I think there’s something to it,” he says. “Reagan was funny. Bill Clinton was funny. Bush was funnier than Gore. Obama was funnier than probably anybody who’s ever run for office.”

Even though the president-elect rarely laughs, Apatow says, and “has a demented sense of humour, Trump is way funnier than Hillary Clinton. ” Apatow concedes that “clearly Hillary Clinton made a few enormous mistakes. One of those mistakes, to me, was that you can’t get paid that much for speeches and go back into politics. That has to be your victory lap – you cash in, you do the speeches and you’re done.”

I ask if he can fathom Trump’s transcendentally weird bromance with Vladimir Putin. Apatow recalls meeting Trump in Atlantic City when he was a young comedian doing standup (which he has been doing again because he loves the immediate connection with an audience).

Did he ever watch The Apprentice? “I watched an enormous amount of The Apprentice,” he replies. “Donald Trump sits in his office. He sends his kids to watch the teams do their missions. Then they come back and tell him what they think of it and then he makes an impulsive decision based on the information that Donald jnr or Ivanka give him. That’s how he’s running the country.”

I note that Apatow seems to have a soft spot for Melania in his tweets. “Of course,” he says. “She lives with him. She made a major miscalculation she has to live with.”

What does he think of the fight against “normalising” Trump (most recently fuelled by Democratic congressman John Lewis saying that Trump is “not a legitimate president”)? “I don’t think it serves a purpose to be against him,” Apatow says. “It only serves a purpose to fight issue by issue.”

The comic muses: “I’m trying to transition from making comments on social media to choosing one or two organisations to work with and support so that I feel like I’m actually being a positive part of the process. You don’t want to be a crank.”