‘Provocative’ train brings Serbia and Kosovo ‘to brink of conflict’ 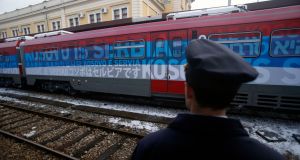 A railway worker stands by the train bearing the words “Kosovo is Serbia” in 20 languages leaving Belgrade for Kosovo. Photograph: Darko Vojinovic/AP 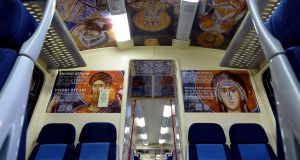 Serbia has accused neighbouring Kosovo of “wanting war” after it barred entry to a train emblazoned with Serbia’s national colours and the slogan “Kosovo is Serbia”.

Kosovo sent special police units to its northern border on Saturday to block the route of the train, which would have been the first to run from Belgrade to the city of Mitrovica since Serbia lost control of Kosovo in a 1998-99 war with local separatists.

After a conflict that killed about 10,000 people, mostly members of Kosovo’s ethnic Albanian majority, a United Nations mission ran Kosovo until 2008, when it officially declared independence from Belgrade. At least 110 countries now recognise the sovereignty of the 1.8-million strong state, but Serbia and its chief ally Russia do not.

Serbia denied that the Russian-made train’s journey was provocative, despite it coming amid heightened tension due to the detention in France of ex-Kosovo prime minister Ramush Haradinaj on a warrant issued by Belgrade.

“We were on the brink of conflict yesterday,” Serbian president Tomislav Nikolic declared after meeting his country’s security council on Sunday.

Kosovo’s deployment of special police forces to block the train line “showed that the Albanians want war”, he said, before adding: “We are a country that must protect its people and territory.”

“This was an ambition to provoke a conflict, to start a wider conflict in this territory that we consider as ours,” he said.

“It was my decision to stop the train . . . to preserve the freedom and lives of our people . . . and show that we want peace,” Mr Vucic said, while warning that Belgrade “will not allow attacks” on Kosovo Serbs.

Kosovo’s president Hashim Thaci, who was a rebel commander in the 1998-89 war, on Saturday denounced Serbia’s “latest provocation” and demanded that his country’s authorities “use all legal means to stop this train immediately”.

Prime minister Isa Mustafa said that “turning back the train was the appropriate action and its entry into the independent and sovereign republic of Kosovo would not be allowed”.

Serbia and Kosovo have been persuaded to hold talks on a range of practical issues by the European Union, which both Balkan states want to join.

Relations remain strained, however, and Kosovo denounced the arrest in France last week of Mr Haradinaj. Serbia wants him to be extradited to Belgrade to face war crimes charges; he has twice been acquitted by a UN court in The Hague.

Mr Nikolic called Kosovo’s behaviour the “convulsions of the outgoing US administration” – suggesting Belgrade may expect a different approach once Donald Trump enters the White House.

Mr Nikolic and Mr Vucic – who claim to have abandoned the ultranationalism that made them allies of Belgrade’s 1990s leader Slobodan Milosevic – pledge to guide Serbia towards the EU without harming relations with Russia. For its part, Moscow is determined to retain its closest ally in the overwhelmingly pro-EU and pro-Nato Balkans.