Seoul looks to learn from mistakes of past Korea summits

After six decades, the Korean War is technically still not over. Here’s what happened – and why it still matters. Video: The New York Times 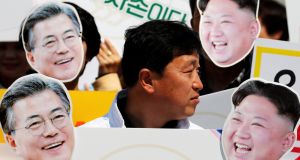 A participant stands among cut-outs of South Korea’s president Moon Jae-in and North Korea’s leader Kim Jong-un during a pro-unification rally ahead of the upcoming summit between North and South Korea in Seoul, South Korea on Wednesday. Photograph: Jorge Silva/Reuters

Friday’s meeting between South Korea’s president Moon Jae-in and North Korea’s supreme leader Kim Jong Un will mark the culmination of whirlwind diplomacy that has taken the two neighbours from the edge of war to openly discussing peace in just four months.

But as Moon moves to secure a deal to establish permanent peace on the peninsula, he is also wary of repeating past mistakes of his two liberal predecessors who held meetings with the late North Korean leader Kim Jong-Il.

The previous two summits, which focused more broadly on ending conflict and expanding economic exchanges, were both held in Pyongyang in 2000 and 2007 and generated a host of economic and military agreements that resulted in little headway.

“The past summits were highly symbolic with their agreements poorly executed. The key now is how to implement any agreement to come out of this week’s meeting,” says Park Jung-jin, a professor at Kyungnam University in South Korea.

Experts say it is a sign of progress that this week’s summit will be held in the truce village of Panmunjom – a neutral venue in the demilitarised zone separating the two Koreas – but they also say the third summit will be more complex than the previous meetings.

Paring back Pyongyang’s nuclear programme has become a priority for Seoul and Washington, given that North Korea has a proven nuclear capability and inter-continental ballistic missiles that could threaten the US mainland.

“We are in a different world now. North Korea now has nuclear weapons, posing a much bigger security threat. The stakes are much higher for everyone now,” says Kim Tae-woo, former head of the Korea Institute for National Unification.

After the countries’ first summit in June 2000, South Korea’s then president Kim Dae-jung won a Nobel Peace Prize for his “Sunshine policy” of engagement with the North. During a three-day visit to Pyongyang, he and North Korean dictator Kim Jong Il agreed to move towards a permanent peace on the Korean peninsula, promote reunification and expand humanitarian and economic exchanges.

The unprecedented meeting led to a series of reunions of families separated by the Korean war and the establishment in 2004 of a joint factory complex in North Korea’s border town of Kaesong. However, the achievement was later tarnished by the revelations that Seoul paid $500 million to Pyongyang to secure the meeting.

In 2007, another liberal South Korean president Roh Moo-hyun extended his predecessor’s engagement policy and walked across the heavily fortified border en route to meet Kim Jong-il. The meeting took place amid a flurry of diplomacy to implement a deal under which Pyongyang had agreed to give up its nuclear programme in return for huge economic and energy aid and improved external relations.

The summit generated an eight-point agreement, with the two leaders pledging to replace the Korean war armistice with a permanent peace regime, and to establish a joint fishing area along the disputed western sea border to prevent bloody naval clashes.

But the agreement, which came in the final months of Mr Roh’s term, made little headway after conservative presidents took over in Seoul, adopting a harder line against Pyongyang, which responded with a string of nuclear and missile tests.

Moon, now president, was Roh’s chief-of-staff at the time and was involved in the 2007 inter-Korean talks.

Although the two previous summits were credited with reducing tension and improving inter-Korean relations, the liberal South Korean governments who participated also came under fire for providing “unconditional” economic aid to the North. Conservative critics argued that the aid was diverted to accelerate North Korea’s weapons development.

“North Korea was pursuing a two-track approach all along, promising to give up its nuclear programme but actually accelerating it,” says Kim from the Korea Institute for National Unification. “I hope that it will be different this time. But North Korea has already reneged on previous agreements six times. It is hard to expect Pyongyang to make a sudden U-turn from its nuclear policy, which has been religiously followed.”

Experts say Moon should press for a more detailed outline for the dismantling of North Korea’s nuclear programme if he does not want to follow in the footsteps of his liberal predecessors.

“They believed that brisk economic exchanges and humanitarian aid will lead to reduced tension and denuclearisation, but there was a limit with the bottom-up approach,” says Kim Jae-chun, a professor at Sogang University in Seoul.

“Now, we need the opposite, top-down approach to not repeat the past mistakes. Complete denuclearisation should come first, ahead of economic exchanges. They need to clearly define what the end state of denuclearisation will be and discuss how to verify it.” – Copyright The Financial Times Limited 2018