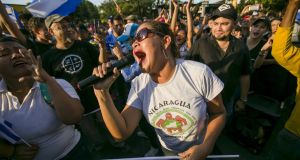 A demonstration held to protest against the government of President Daniel Ortega, in Managua, Nicaragua, on Monday. Photograph: Jorge Torres/EPA

Thousands of demonstrators took to the streets in the capital of Nicaragua on Monday to demand the resignation of the country’s president after a violent crackdown by police on protests that has left at least nine dead.

Demonstrators waved blue and white Nicaraguan flags and chanted “President, get out!” as they rallied in several points around the capital of Managua. But the government kept police back from the demonstrations after the violence of recent days.

The police crackdown on protesters and curbs on some media have fuelled broader criticism of Mr Ortega. On Sunday night, in an effort to calm the streets, Mr Ortega said he had cancelled the welfare-overhaul initiative.

Monday’s march, led by university students, was the largest seen in six days of protests, according to a Reuters witness. Demonstrators called for protesters jailed in the prior days to be released as well as an end to the Mr Ortega government.

La Prensa, a conservative paper that has been a harsh critic of both Mr Ortega and the previous regime he fought to overthrow, said he had “lost control of the streets”.

“Daniel Ortega no longer has the political capacity or moral authority to continue governing,” it wrote.

Police had clashed with students bunkered down at the Polytechnic University of Nicaragua on Sunday night, and one died after being shot while five others were treated for injuries, said Bassett Guido, a Red Cross spokeswoman.

Mr Guido said the Red Cross had registered nine deaths since the protests began Wednesday, and attended to 433 injured people. The Nicaraguan Center of Human Rights (CENIDH) said on Monday at least 25 people had died. Marlin Sierra, the director of the CENIDH, said 120 people had been arrested.

On Monday, the US state department authorised the departure of US government employees and curbed consular services.

A state department official said the embassy in Managua would stop many of its operations until further notice but that it would continue to provide services to US citizens and visa applicants.

Nicaragua has been one of Central America’s more stable countries, mostly avoiding the turmoil caused by gang violence or political upheaval that has affected nearby Honduras, El Salvador and Guatemala. – Reuters