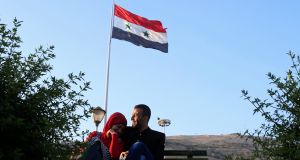 A couple sit in a park in Damascus after the US, UK and France attacked three sites said to be related to Syria’s chemical weapons programme. Photograph: Ali Hashisho

My driver Moutaz was upbeat during the drive from Beirut to Damascus. “My brother’s son has come home after seven years in the army. I know of other soldiers also. Petrol is cheaper. The [Syrian] pound is 445 instead of 500 to the dollar.”

Cars crept past the checkpoint at the entrance to the capital and we joined the flow of noon traffic along Mezze boulevard, through the tunnel and round the high spurting fountains of Umayyad Square.

“Last Wednesday, this street was empty,” said Moutaz as he turned in to the broad avenue leading to the elegant early 20th-century Hijaz railway station, its stained-glass windows glowing red and blue in the warm noon sun. “All Damascus was empty. Shops and schools were closed. Mortars came. People were afraid. Two days later came the ceasefire. Next day all back to normal.”

Vehicles swarmed the streets and pedestrians packed the pavement outside the post office and the old Umayyad Hotel, now a university, where Ahmad, bent over his kit, burnished a client’s shoes.

War and peace are switched off and on abruptly in the fratricidal and external proxy wars that have dealt death and destruction these seven long years.

While tens of thousands of fighters and civilians had been evacuated from Ghouta, residents of Damascus remained and regained 'normal', or 'war normal', lives

Since last December, Damascus had been regularly peppered by mortars and rockets from the countryside to the east, known as eastern Gouta, occupied since unrest began in 2011 by shifting coalitions of rebels and jihadis. Although declared a “deconfliction” or ceasefire zone by Russia, Iran and Turkey last May, an al-Qaeda offshoot, excluded from the truce, had repeatedly initiated attacks on the Syrian army and lobbed missiles into the capital.

Three other jihadi factions joined in, before the Syrian army launched an all-out offensive at the end of January, devastating the towns and villages in the Ghouta and killing up to 1,500 people. On March 23rd, Russia negotiated a ceasefire agreement with the second-largest jihadi faction providing for the surrender or evacuation of its fighters and their families. Subsequent deals with the other groups appeared to end the Ghouta conflict.

When I arrived on March 27th, war planes no longer roared overhead en route to targets in Ghouta. Bombs on Ghouta and mortars on Damascus no longer killed and maimed civilians and damaged homes and public buildings. While tens of thousands of fighters and civilians had been evacuated from Ghouta, residents of Damascus remained and regained “normal”, or “war normal”, lives.

Off Halbouni street householders surrounded a bakery making fresh spinach, olive, cheese and meat pastries, placed their orders, and carried away large parcels of family favourites. The cashier had earned a master’s degree in business administration and said he was looking for another job. “Now that we have peace in Damascus, I might be lucky.”

If the dour jihadis in Ghouta nearby had won, there would be no modish clothing for girls and women, no joyful celebrations, and neither Catholic nor Orthodox Easters

Students flocked to nearby Damascus university. A few paused to check out secondhand books displayed on the iron spike fence surrounding the military museum or stopped to buy juice or crisps from a kiosk on the corner near the tourism ministry.

Shoppers crowded the broad, cobbled street of Souq al-Hamidiyah; slender rays of sunlight streamed in through holes in the arched metal roof erected at the end of the 19th century. Young Muslim girls, wearing headscarves or not, short jackets and skin-tight trousers chatted volubly with elders in voluminous black cloaks, both sides unfazed by the generation gap between conservative cover-up and 21st-century styles.

In the Old City’s Christian quarter on the western Easter and eastern Palm Sunday, women and teenage girls attended church in too-small dresses and too-short miniskirts, fashionable in the West decades ago. A marching band turned off the Street Called Straight and entered the courtyard of Mariamia church, festooned with palms.

If the dour jihadis in Ghouta nearby had won, there would be no modish clothing for girls and women, no joyful celebrations, and neither Catholic nor Orthodox Easters.

Peace did not last. Although 40,000 civilians had returned to towns and villages in the southern of Ghouta evacuated by three armed groups, Jaish al-Islam, the largest, refused to leave. The army resumed its offensive, mortars fell on Damascus, people hunkered down in their homes and waited.

The military was accused of using chemical weapons. Damascenes feared large-scale western retaliation. When on April 14th, the US, UK and France carried out measured strikes on three sites said to be related to Syria’s chemical weapons programme, Damascenes sighed in relief and switched to “normal” mode. This time the shift from war to peace took only three or four hours. Syrians never know what next to expect but yearn for peace.