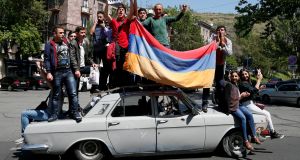 Police took up positions in the centre of the Armenian capital Yerevan on Wednesday as tens of thousands of people protested against the ruling elite and the acting prime minister suggested new parliamentary elections to defuse the political crisis.

“The fight is not over!” said Susana Adamyan (21), one of the demonstrators, who was clutching a placard calling on people to take a stand as police looked on.

Other protesters, many of them young people, held portraits of government officials whose faces had been crossed out with red paint.

When senior members of the ruling Republican Party appeared nearby, a Reuters reporter heard people shouting at them “Go home! You’re a disgrace!”

Though protests have so far been peaceful, the sudden upheaval has threatened to destabilise Armenia, a Russian ally in a volatile region riven by its decades-long, low-level conflict with Azerbaijan.

Moscow, which has two military bases in Armenia, is closely watching events.

The crisis has seen tens of thousands of people take to the streets in anti-government protests in the last two weeks and looked to have peaked on Monday when Serzh Sarksyan, the object of protesters’ fury, resigned as prime minister.

Demonstrators, led by opposition leader Nikol Pashinyan, had accused Mr Sarksyan of manipulating the constitution to cling to power and crowds celebrated wildly after he quit.

Mr Pashinyan had been due to hold talks today with Karen Karapetyan, the acting prime minister, to decide on the next steps.

Those talks were cancelled after the two sides failed to agree an agenda, however, and Mr Pashinyan declared late on Tuesday he was ready to become the people’s prime minister.

Mr Karapetyan suggested on Wednesday that early parliamentary elections be held so as to test the level of popular support for Mr Pashinyan and his potential viability as prime minister.

“What does ‘people’s candidate’ mean?” Mr Karapetyan asked at a news conference.

“I don’t know any country where a prime minister is chosen like that. There are elections for that. If he [Pashinyan] is the people’s choice, that means the people will choose him.”

The economy of the landlocked South Caucasus country of three million would face problems if the crisis continued, Mr Karapetyan said.

He did not say when new elections might be held.

In a sign the unrest could already be affecting the economy, Mr Pashinyan said protesters had blocked a customs post at the border with neighbouring Georgia.

Separately, President Armen Sarkissian said he would start talks with political forces to try to resolve the crisis.

“I am starting consultations with parliamentary and non-parliamentary representatives to discuss the situation that has been come about in the country and a way out of it,” Mr Sarkissian said in a statement.

Although thousands of people have taken to the streets and rallied behind him, political forces in parliament loyal to protest leader Mr Pashinyan hold only about 8 per cent of seats.

However, the second biggest party in parliament said on Wednesday it was joining the protest movement and would encourage its supporters to take to the streets. – Reuters