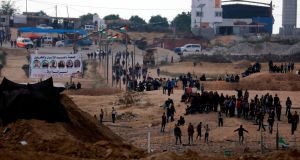 A Palestinian journalist who was shot by Israeli forces nearly two weeks ago while covering a protest along the Gaza-Israel border has died of his wounds, Palestinian health officials said.

He was the second journalist killed by Israeli gunfire since the weekly Friday protests began on March 30th, pushing for a right of return of Palestinian refugees and their descendants to homes in what is now Israel.

The health officials said a bullet had penetrated Abu Hussein’s side. He was moved from Gaza to a hospital in the Israeli-occupied West Bank and then transferred to a hospital in Israel, where he died.

His death raised to 38 the number of Palestinians killed in the protests near the border.

An Israeli military spokeswoman had no immediate comment on Abu Hussein’s death.

Yaser Murtaja (30), a cameraman for Palestinian Ain Media, was shot on April 6th and died the next day. After his death, the Israeli military said it does not intentionally target journalists and that it would look into the circumstances of the shooting.

The Palestinian journalists’ union accused Israel of “deliberately” targeting Abu Hussein and Murtaja, vowing to seek to bring “leaders of the occupation” to justice.

Abu Hussein will be buried in Gaza on Thursday.

Israel’s live-fire response to the protests has drawn international criticism.

Israel says it has been warning Gazans not to approach the border fence and that it is doing what is necessary to stop the barrier from being damaged or breached.

The Palestinians said Israel, which has deployed army sharpshooters along the frontier, used “excessive force against unarmed protesters”. Some protesters have hurled stones and rolled burning tyres towards the fence.

Gaza is run by the Hamas Islamist movement, designated by Israel and the West as a terrorist group. – Reuters