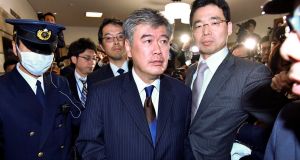 It’s a familiar story: a woman swatting away the unwanted sexual attentions of an older, powerful man. Ignoring her pleas to stop, he asks: “Can I touch your breasts? Can I give you a hug?” He persisted, so she alerted her male supervisor, who advised her to drop it. Instead, she took a recording of the encounter to a weekly magazine, which published one of the biggest scoops of the year in Japan.

The man on the recording, says the magazine Shukan Shincho, is the nation’s top finance bureaucrat and vice finance minister. Or was: Junichi Fukuda (57) announced his resignation last week, while denying he did anything wrong. The woman, it turns out, is a reporter for broadcast network Asahi TV, which explained its initial response by saying it wanted to protect her from “further indignity”.

The scandal has added to the problems of a government increasingly mired in sleaze and corruption: polls show support slumping to its lowest level since prime minister Shinzo Abe returned from the political wilderness in late 2012. It also has some wondering if the worldwide backlash against sexual harassment ignited by Harvey Weinstein has belatedly arrived in Japan.

Japan’s opposition parties are boycotting parliament to demand the resignation of finance minister Taro Aso, Fukada’s boss. Aso is already under fire for overseeing a string of alleged cover-ups at his ministry. Some politicians last week wore black and held up signs saying: “Me Too”.

The reaction from Japan’s male political establishment has been somewhat different. Some say hanging around in bars with male bureaucrats and politicians is part of the job of women reporters and they should take their knocks – if they want their stories.

Bunmei Ibuki, a former minister for finance, zeroed in on the alleged victim, calling her immoral for taking her complaint to the media. Former education minister Hakubun Shimomura said it was a “crime” to sell her tape to the media.

Aso speculated this week that Fukuda had been set up by the woman. A weekly magazine story quotes him as saying that the way to stop harassment of women reporters is to replace them with men.

Instead of launching a third-party investigation into the claims, finance ministry bureaucrats posted Fukuda’s denials on its website on April 16th and called for women harassed by him to come forward for interview – with its own hired lawyers. Japan’s newspaper unions reacted furiously, calling the tactic “intimidation” of victims and the media. The Asahi journalist remains anonymous.

That’s hardly surprising, given the experience of Shiori Ito, another journalist who says she was raped in an upmarket Tokyo hotel by a senior television reporter in 2015. As the Weinstein scandal widened, she went public with her claims. A flood of hate mail branded her a “prostitute” who had brought the rape on herself.

Rape statistics in Japan are among the lowest in the developed world. Victims of sexual assault are even less likely to tell the police than elsewhere; fewer then 5 per cent of Japanese women officially report rape. Less than a third of the victims of assault even talk about it to friends or relatives, according to a 2014 government survey.

Even when the police and prosecutors can be persuaded to take up a rape case, the odds against conviction are high. Many cases conclude with “suspended prosecution”, meaning guilt is assumed but the perpetrator is not charged, often in return for financial compensation. Ito was offered cash to drop her claims.

She has since written a best-selling book, which is less concerned about settling scores than highlighting the treatment of rape victims. The book describes having to re-enact her assault to a room full of uniformed men and being advised to forget what occurred. “It was like being raped again,” she says.

The impact of the claims against Fukuda remains to be seen. His resignation means he will likely escape punishment. Aso has insisted he will not quit.

His resignation would be costly for prime minister Abe. They are close allies and Aso controls the second-largest faction in the ruling Liberal Democratic Party. After more than five years in office, the government is already looking vulnerable amid claims it is venal and corrupt. “Me Too” or not, it will try to tough the latest scandal out.