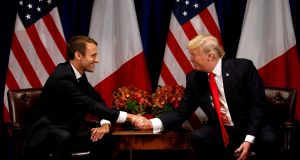 French president Emmanuel Macron arrives in Washington on Monday for his three-day state visit to the United States, where he is expected to discuss a myriad of foreign policy and trade challenges with US president Donald Trump.

The centrepiece of the visit will be an official state dinner at the White House – the first hosted by Mr Trump and his wife – on Tuesday evening. Mr Macron will address Congress on Wednesday – the 58th anniversary of former president Charles de Gaulle’s address to a joint session of Congress in 1960.

Mr Macron arrives a little over a week after France, the United States and Britain launched strikes against chemical weapons targets in Syria. Developments in North Korea and uncertainty about the future of the Iran nuclear deal are also likely to loom large in discussions.

North Korea took the international community by surprise late on Friday by announcing it would no longer test nuclear weapons or long-range missiles, and would close a nuclear test site.

While the announcement, carried by North Korea’s state media, was given a cautious welcome by international leaders, on Sunday Mr Trump sounded a warning note.

“We are a long way from conclusion on North Korea. Maybe things will work out, and maybe they won’t – only time will tell,” he said in an early-morning tweet from the White House. “But the work I am doing now should have been done a long time ago!”

In an earlier tweet he had welcomed the news as “progress”, and took issue with an NBC commentator on a Sunday morning news show who suggested that America had surrendered a lot to North Korea. “We haven’t given up anything and they have agreed to denuclearisation (so great for World), site closure, and no more testing!” the president tweeted.

While Pyongyang appeared to show a willingness to halt nuclear testing, no commitments have been given to dismantle the country’s huge nuclear arsenal. The announcement comes ahead of a landmark summit between North Korean leader Kim Jong-un and his southern counterpart Moon Jae-in scheduled for Friday near the Korean border.

The first hotline was installed between the two leaders late last week. South Korea welcomed the announcement to halt testing and close the nuclear site in the northern part of the country as “a significant step toward the denuclearisation of the Korean Peninsula the world has wished for”.

Meanwhile, White House officials said the Iran nuclear deal would also be “a major topic of discussion” during Tuesday’s meetings between the French and US leaders. In an interview with Fox News aired on Sunday on the eve of his three-day visit to Washington, the French president said the United States should stay in the Iran deal as long as there was no better option, saying he had no “plan B” for the nuclear deal.

The United States has signalled its wish to change the deal or else exit the agreement which was agreed by former US president Barack Obama and global allies in December 2015.

Iran’s foreign minister Mohammad Javad Zarif warned over the weekend that the United States would have to “face the consequences” if it tried to change the agreement. “We will make our decision based on our national security interest when the time comes, but whatever it is it will not be very pleasant for the United States, I can say that.”

A May 12th deadline is fast approaching which could give Mr Trump the opportunity to effectively pull out of the deal – he will be obliged to decide whether to sign a waiver lifting sanctions on that date and has indicated that he will not do so if new restrictions are not included.

Mr Macron is expected to urge Mr Trump to stick with the Iran deal, which has been supported by the European Union and several regional powers. Iran’s role in the Syrian war also complicates matters, Mr Macron said on Fox News.

Mr Zarif, who was speaking in New York ahead of a series of meetings this week at the UN, said the US was “sending a very dangerous message to the people of Iran and the people of the world”.

“It says you never come to an agreement with the US. The situation is creating an impression globally that agreements don’t matter.”