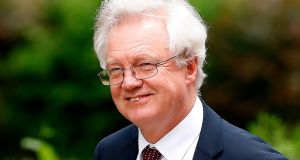 Brexit secretary David Davis is adamant time is still on his side as he sought a way through what has become the biggest crisis of the Brexit negotiations so far. Photograph: Tolga Akmen/AFP/Getty Images

The UK’s Brexit secretary David Davis has said he would consider it a failure if the UK was forced to extend its membership of the EU customs union, amid mounting concern among MPs that time is running out for talks on alternative solutions.

Ruling out this possible compromise route for minimising the effects of a hard Border in Ireland, Mr Davis instead insisted the problem did not need solving until at least October. The issue is dominating Westminster this week in the run-up to a Commons debate about customs union membership on Thursday.

Mr Davis was chastised by the chair of the Brexit committee, Hilary Benn, for having to leave its latest hearing on Wednesday to prepare for urgent cabinet talks on the matter. But before leaving, Mr Davis was adamant that time was still on his side as he seeks a way through what has become the biggest crisis of the Brexit negotiations so far.

“I do not expect the solution to be an extension of the customs union,” Mr Davis told the committee member Jacob Rees Mogg. “I would view that on my part as a failure.”

He was also dismissive of the possibility that MPs may force his hand through a series of threatened Commons rebellions. “I will not enter into hypotheticals,” Mr Davis said. “I expect the government policy to be upheld.”

A further extension of customs union participation – beyond the already-agreed 21-month transition phase – has emerged as a possible fallback because the British government’s alternative customs proposals will take time to implement.

Continued participation in a customs union would not on its own ensure frictionless borders after Brexit, owing to the need for shared single market regulations too, but obviating the need for so-called “rules of origin” customs checks is seen by business groups as a vital part of keeping trade flowing freely.

Mr Davis said the best solution from a British perspective was a comprehensive free trade agreement combined with a deal to recognise shared regulations and customs procedures.

“If you don’t have a tariff or a quota then that makes all of the customs agreement options easier,” he said. “It doesn’t make them go away but it makes them easier. The issue then comes down to regulatory issues and rules of origin.”

If this ambitious deal, or the alternative technological suggestions, cannot be agreed with the EU, the Brexit secretary acknowledged that a proposed plan C to align all regulations was still acceptable as an “emergency parachute”.

But he added that the issue could wait until a final withdrawal deal is struck in October rather than meet an “artificial” June deadline pushed by Brussels.

“The free trade agreement, mutual recognition of standards and rules of origin have to be resolved by October,” he said. “But it only bites in practical terms in 2021 [after the transition phase ends]”.

MPs have expressed concern that such an approach will give them little time to scrutinise any deal struck before Brexit, and even then this would only be a political statement rather than a binding treaty.

“How can parliament set any store on it when the really important part of our future relationship is merely a statement by the [EU]council?” Mr Benn asked. – Guardian