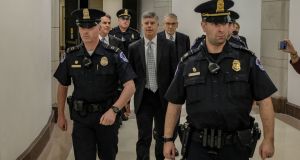 Bill Taylor, the top US diplomat to Ukraine, testified to the house committees regarding the impeachment inquiry looking into Donald Trump’s relationship with Ukraine. Photograph: Alex Wroblewski/Getty Images

Donald Trump’s troubles intensified this week as Bill Taylor, the US’s top diplomat in Ukraine, testified before the three House of Representatives committees leading the impeachment inquiry into the US president.

For almost 10 hours the career diplomat spoke to lawmakers from both parties, in defiance of the state department’s instruction that its employees should not co-operate with the inquiry.

Taylor’s 15-page written statement, which was released as he was being questioned by lawmakers, presents the most damning evidence to date of the Trump administration’s activities in Ukraine, and in particular the key question of whether there was a quid pro quo involved when the US president withheld $391 million (€351 million) in military aid to Ukraine this summer.

Taylor, who was asked to return to the job of ambassador to Ukraine, which he held from 2006 to 2009, arrived in Kiev in June, after his predecessor Marie Yovanovitch was recalled early by the Trump administration.

His statement meticulously recounts his gradual realisation that the Trump administration was pursuing a foreign policy at odds with the government’s stated stance on Ukraine, and that “there appeared to be two channels of US policy-making and implementation, one regular and one highly irregular”, the latter involving Trump’s personal lawyer Rudy Giuliani.

While his written testimony did not provide any evidence or written proof that would implicate Trump directly in the quid pro quo, Taylor instead recounted how various officials and central figures in the administration pushed Ukraine to pursue investigations in exchange for aid and a meeting with Trump in the White House.

In particular, Taylor said that he was told by Gordon Sondland, Trump’s ambassador to the European Union, that Trump had told him that he wanted Ukrainian president Volodymyr Zelenskiy to state publicly that Kiev would investigate Burisma, the gas company that employed former vice-president Joe Biden’s son Hunter, in addition to looking into alleged Ukrainian interference in the 2016 US election.

Sondland also said that “everything” – including the promised $391 million in military aid and a meeting for Zelenskiy with Trump in the White House – was dependent on a public announcement of the investigations, according to Taylor’s statement.

Taylor also described how an official in the US office of management and budget said in a July 18th video call that the aid would be withheld, and that the instruction had come straight from the president. “In an instant I realised one of the key pillars of our strong support for Ukraine was threatened,” he said.

Similarly, he described conversations later in the summer when Tim Morrison – the successor to former White House Russia adviser Fiona Hill – told him that Trump did not want to provide “any assistance at all” to Ukraine. Taylor also claimed that Morrison told him about a conversation between Sondland and Andriy Yermak, an adviser to Zelenskiy, in which the ambassador suggested that the aid was linked to securing a commitment on an investigation into Burisma.

The White House dismissed the Taylor hearings as a “co-ordinated smear campaign from far-left lawmakers and radical unelected bureaucrats waging war on the Constitution”.

But Taylor’s testimony raises serious questions about key figures in the Trump administration and the role they played in encouraging the Ukrainian government to pursue politically motivated investigations.

In particular, doubts have been raised about the veracity of Sondland’s testimony to lawmakers last week. Similarly, investigators are now likely going to want to hear from Morrison as well as the unnamed official in the office of management and budget. They could provide further evidence that could incriminate the president.

Democratic members of the House committees may also renew efforts to secure relevant documentation from the White House and state department. For example, Taylor said that he wrote to secretary of state Mike Pompeo outlining his alarm at US policy towards Ukraine in late August.

Similarly, there will be renewed focus on the July 25th phone call between Trump and Zelenskiy, in which Trump asked for an investigation into the Bidens, following Taylor’s claim that he was not given an immediate read out of the call, which would have been in line with protocol.