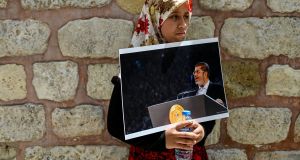 A girl holds a photograph of former Egyptian president Mohamed Morsi during a symbolic funeral ceremony on June 18th at Fatih mosque in Istanbul. Thousands joined in prayer in the Turkish capital for Morsi, who died after collapsing in a Cairo court. Photograph: Getty Images

The sudden death from a heart attack of Egypt’s ousted and imprisoned president Mohamed Morsi during a court appearance on Monday has shed light on the government’s severe crackdown on the Muslim Brotherhood.

Morsi was reportedly deprived of diabetes medication and treatment for high blood pressure and liver disease and confined under harsh conditions. His incarceration contrasted starkly with the comforts accorded his deposed predecessor, Hosni Mubarak.

The military takes care of its own. Toppled by the 2011 uprising and charged with corruption and abuse of power, Mubarak – a president of 30 years and former air force chief – was initially confined in a prison suite, provided with medical equipment and nursing and later held at a military hospital until he was freed in 2017.

Morsi (67) was held in solitary confinement without hope of release. During his fatal court appearance on charges of spying for  Qatar, he threatened to expose `secrets`, before collapsing

A senior member of the Muslim Brotherhood which was outlawed after his removal by the military in 2013, Morsi (67) was held in solitary confinement without hope of release. During his fatal court appearance on charges of spying for Qatar, he threatened to expose “secrets”, before collapsing. He was buried in Cairo on Tuesday in a restricted family ceremony.

Morsi was Egypt’s first freely elected president since the 1952 overthrow of the monarchy.

The Muslim Brotherhood, founded in 1919, was Egypt’s only organised political movement, with a mass following, and had won majorities in Egypt’s post-uprising assembly and consultative council. Morsi defeated his opponent Ahmed Shafiq, a Mubarak associate, by a narrow margin due to votes from Egyptians of many political persuasions who rejected Mubarak’s man.

At the outset of his turbulent year in office, Morsi pledged to be president of all Egyptians but did not honour this promise. Instead, he adhered to policies fixed by the brotherhood leadership, which sought to monopolise power by installing members in key positions in the government, administration, and judiciary. Morsi did not tackle Egypt’s economic ills, brutal security apparatus, or rampant corruption. In the drive to impose a new pro-fundamentalist constitution, he granted himself powers that put him above the rule of law.

Morsi was accused of empowering Islamic State-affiliated radicals in northern Sinai and turning a blind eye while Sunni supporters attacked Coptic Christians and Shias. He was warned repeatedly to share power with other parties and political forces, but refused.

At the end of June 2013, millions of Egyptians poured into the streets to call for his ousting. The army, under his appointee Abdel Fattah al-Sisi, obliged on July 3rd. The brotherhood responded by staging mass sit-ins in Cairo and violent attacks around the country. Frightened by anarchy and insecurity, Egyptians turned against the brotherhood and urged Sisi to round up and imprison its members. Many, including Morsi, were sentenced to death or long prison terms.

In June 2014, Sisi was elected president by a landslide and began to establish a regime far more authoritarian and harsh than that of Mubarak. Sisi’s mass detentions of brotherhood backers and secular dissidents could deter reprisals over Morsi’s death, but could also prompt Egyptian and international human rights organisations to increase pressure on Sisi to end repression, free detainees and improve conditions in Egypt’s cruel prisons.