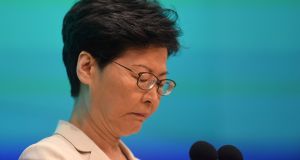 Hong Kong’s chief executive, Carrie Lam, offered a “sincere and solemn” apology to the people of her city, and hinted that she had effectively shelved the controversial law which sparked the current crisis as she reached for a compromise with protesters .

In her first press conference since record crowds poured onto the streets of Hong Kong to denounce Lam, the bureaucrat-turned-politician described going through an emotional period of “self-reflection”, and said she hoped to heal rifts in society.

But Ms Lam refused to fully meet any of the protesters’ requests for her to resign, withdraw her extradition law, and apologise both for police brutality and for describing one protest as a riot.

She said she would not resign, insisted the extradition law should be left on the books until it legally expired in just over a year, and said only that protesters who had not used violence would not need to worry about rioting charges, citing a previous statement from the city’s police chief.

Ms Lam’s announcement on Saturday that she would suspend the Bill, days after she promised to ram it through the legislature, was a humiliating climbdown for both Beijing and the woman it had hand-picked to rule Hong Kong.

But it did not satisfy the many people in Hong Kong who are worried that the law would fatally damage the city’s economy and society, by allowing both residents and visitors to be sent for trial in China’s opaque, Communist party-controlled courts.

They came in record numbers on Sunday to march through the city centre, with organisers putting the turnout at nearly 2 million.

The crowd called on Ms Lam to withdraw the law, apologise for police violence, halt a crackdown on activists – and ultimately resign.

Just a few hundred people have turned out at the start of the week as the people of Hong Kong wait for a government response, but there is no question that public anger remains high. Both Ms Lam and Beijing will be weighing the cost of further concessions against the risk of further inflaming tensions.